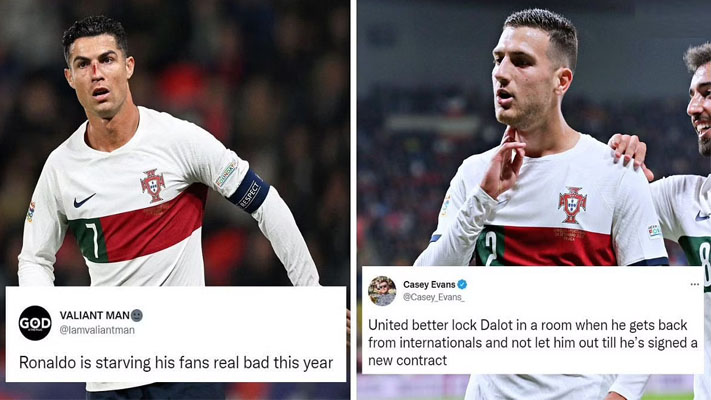 Cristiano Ronaldo‘s Portugal romped to a 4-0 victory over the Czech Republic in the UEFA Nations League on September 24 to send Twitter into hysteria.

Fernando Santos’ side’s win never seemed in doubt as they dominated a Czech side who were vulnerable defensively.

The warning signs were there that Portugal were going to be a real threat for the Czech defense to deal with.

Centre-back Ruben Dias hit the side netting in just the 10th minute.

Cristiano Ronaldo collided with Czech goalkeeper Tomas Vaclik moments later and would nurse a nose injury for the remainder of the match.

Jaroslav Šilhavý’s side broke brilliantly in the 30th minute when Vladimir Coufal sent in a delightful cross but Antonin Barak mistimed his header.

Portugal took the lead just two minutes later when Diogo Dalot got on the end of Rafael Leao’s astute pass to bag his first international goal.

The Portuguese scored again on the brink of half-time.

Mario Rui’s sublime through ball found Bruno Fernandes who could make no mistake from a mere five yards out.

Cristiano Ronaldo was then involved for the wrong reasons when VAR adjudged him to have handballed in his own box.

The legendary forward’s blushes were spared when Patrik Schick blazed his penalty over the bar.

It was much of the same in the second half with Santos’ men dominating proceedings and Dalot grabbed his second of the game in the 52nd minute.

The Manchester United right-back cut inside and sent a delightful left-footed effort past the helpless Vaclik.

Liverpool’s Diogo Jota got in on the action with a header in the 82nd minute following Cristiano Ronaldo’s flick on from a corner.

There were several more chances for either side but Portugal ran out deserved winners and now sit top of League A Group 2 after Spain’s surprise defeat to Switzerland.

Here are some reactions from fans on Twitter who were delighted with the win but clearly believe Cristiano Ronaldo should have been more involved:

Ronaldo didn’t score in tonight’s game but his team were a real joy to watch as they mauled a defensively disappointing Czech Republic side.

The performances of Dalot, Fernandes and Rui particularly caught the eye, with the full-backs played in the absence of the usual starting full-back Joao Cancelo.

It bodes well for Santos’ side ahead of the World Cup as they look to win the trophy for the first time in their history.