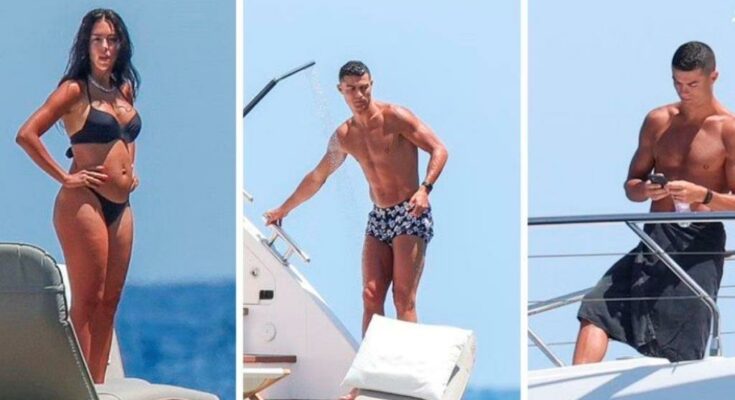 Manchester United superstar Cristiano Ronaldo has been photographed (via the Mirror) whilst catching some sun with his girlfriend Georgina Rodriguez on a private yacht. The power-couple is spending their summer winding down in Ibiza.

Having spent three seasons with Juventus in Italy, Ronaldo returned to England last summer, rejoining his old club Manchester United. His return was met with optimism in Manchester but that was soon faded by the club’s dismal run throughout the course of the season.

United failed in all domestic cup competitions and were knocked out by Atletico Madrid in the Champions League round of 16. They also performed poorly in the league, where the Red Devils finished sixth in the standings.

Ronaldo, as is in his nature, continued to score despite United failing to support him with better players. He netted 18 goals in the league (third-highest) and finished with 24 goals overall across competitions in 398games.

Ronaldo is currently enjoying time off in Ibiza with his loved ones. The Portuguese captain was clicked enjoying his off time with showers. He was also seen checking his phone frequently. It would be anybody’s guess if it has anything to do with Manchester United’s potential transfer rumors.

Earlier this month, Cristinao Ronaldo himself shared images of himself basking in the sun and having a large family meal. His girlfriend Georgina Rodriguez posted as many as six images, sharing some heartwarming moments with her children and extended family.

Cristiano Ronaldo could perform even better in the 2022-23 season

As mentioned before, Cristiano Ronaldo did his job and more by scoring 24 goals for a sub-par United team last season. He finished the season as their top-scorer.

The Portuguese forward might just get better this season. He has a whole pre-season under new management, where he can get accustomed to the tactics and style of play under Erik ten Hag. It will only benefit the veteran forward, who might return next season hungry to outdo his performances from the last campaign.

Cristiano Ronaldo has netted 142 times in 330 games across two stints for Manchester United. His current contract is set to expire next year. While there has been some talk of a potential departure, the Mirror reported that United expect him to see out his contract until the summer of 2023.