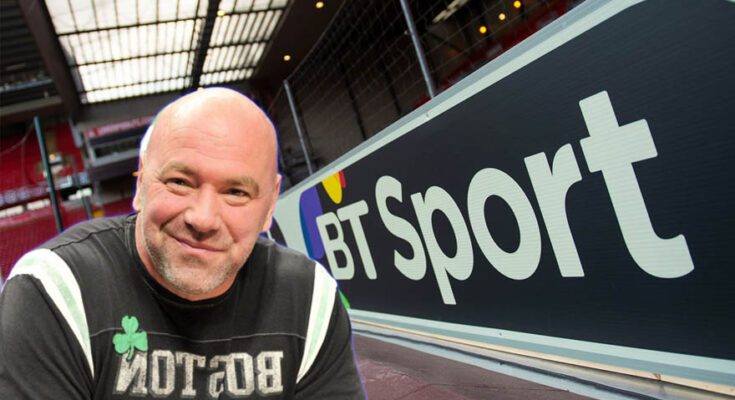 The broadcast relationship between the Ultimate Fighting Championship and BT Sport will continue for the foreseeable future.

It was recently announced that the UFC and BT had extended a deal that gave exclusive coverage of the UFC for the United Kingdom and Ireland.

BT Sport announced on Tuesday that it has agreed to a “new multi-year media rights deal that builds upon their existing broadcast partnership for the UK and Ireland, ensuring that BT Sport will remain the exclusive media home for UFC.” The UFC and BT Sport partnership began in 2013.

The agreement includes all live UFC events as well as “hundreds of hours” of original programming and classic bouts from the promotion’s library.

“The fans from the UK and Ireland love this sport and they have always been great to us.” Dana White said “And now, our roster of talent from these countries is the strongest it’s ever been.

“We’re thrilled to continue our partnership with BT Sport to keep promoting these athletes, building stars, and broadcasting the best combat sports events on the planet to these incredible fans.”

The Las Vegas-based organization will return to the United Kingdom for an event at the O2 Arena London on July 23 featuring a heavyweight clash between Curtis Blaydes and Tom Aspinall.

UFC president Dana White admits that should rising heavyweight, Tom Aspinall, get passed Curtis Blaydes it could land him in the UFC heavyweight ranking’s top threes.

It was recently announced that the UFC would be making a return to the UK in July following the success of the promotion’s first event on British soil since the pandemic. Much like last time, the show will be headlined by heavyweight sensation, Tom Aspinall.

In March of this year, Aspinall made quick work of the towering Alexander Volkov, forcing the former Bellator heavyweight champion to tap in the first round, much to the delight of charged London crowd.

Ahead of the July 23 event, talking to BT Sports Dana White discussed what victory could mean for Aspinall.

Yeah, the guy’s [Aspinall] got a 100% finish rate,” Dana White began. “He’s ranked number six in the world, now he’s gonna headline in his home country, what’s better than that”

“This is a big one for him, man. If he can beat Blaydes, breaks in, possibly to the top three in the world, it’s a big deal.”

Dana White would also add that a newly extended broadcasting partnership with the UFC and BT Sport could play a significant role in growing the sport and help produce more talent such as Aspinall.

“There’s tons of great talent coming out of the UK now,” Dana White said. “I think that now with the pandemic being over, us coming over with live events and this new BT deal it’s only gonna make the sport bigger and create more and more incredible talent from that part of the world.”