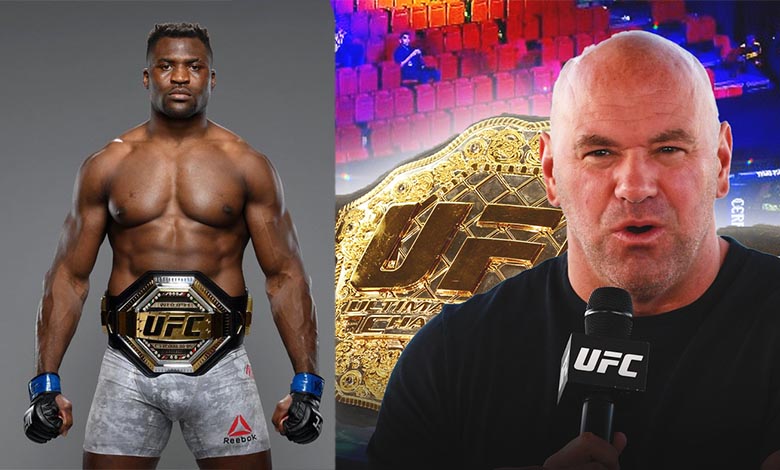 With UFC heavyweight champion Francis Ngannou recovering from major knee surgery that will likely keep him sidelined until 2023, it appears the division may move on in his absence.

On Saturday, UFC President Dana White confirmed the promotion will likely introduce an interim heavyweight title with Ngannou sidelined for such a significant amount of time.

“It’s very possible [we crown an interim champion],” White said at the UFC London post-fight press conference. “We find out this week [how long he’s out].

“If nine months is true, if it’s going to take nine months for him to get cleared to start training again. That’s almost a year before he would fight. So yeah, we would do an interim title.”

Ngannou underwent knee surgery on Friday in Los Angeles, with the reigning UFC champion revealing he had a full ACL reconstruction along with additional work on his MCL.

After the surgery was scheduled, Ngannou’s manager Marquel Martin told MMA Fighting that the heavyweight knockout artist would likely be out of action “9 or 10 months.”

Ngannou actually delayed the surgery until March because he had already planned a trip home to Cameroon following his win over Ciryl Gane back in January at UFC 270. By all accounts, that means Ngannou will be out until at least early 2023, which seems to coincide with White’s estimations and plans to eventually introduce an interim title.

If that happens, it will be the second time the UFC hands out an interim belt during Ngannou’s reign. The first occasion came just three months after Ngannou knocked out Stipe Miocic to win the title in 2021, as the UFC sought a main event for a pay-per-view scheduled in Houston this past August.

Ngannou had asked to delay his return until September 2021, but the UFC ultimately decided to just move forward with the card in August and put an interim title up for grabs between Gane and Derrick Lewis.

That culminated in Ngannou unifying the belts with a unanimous decision win over Gane.

An interim title being introduced could also set the UFC up for the future if the promotion is unable to come to terms with Ngannou on a new contract. The 35-year-old heavyweight champion is believed that have fought out his UFC deal with the win over Gane. His contract is currently set to expire in December, which would then make him a free agent.

White has been insistent about finding common ground with Ngannou on a new deal, but at this stage, the two sides have not come to any kind of an agreement on an extension.