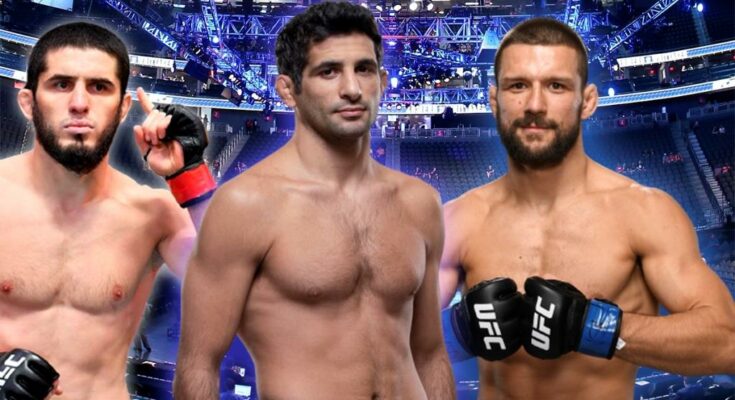 Mateusz Gamrot (21-1 MMA, 4-1 UFC) picked up his biggest win this past Saturday when he rallied to defeat Arman Tsarukyan in the UFC on ESPN 38 main event. Afterward, he proceeded to call out former interim lightweight champ Justin Gaethje.

Mateusz Gamrot received congratulations from former lightweight champion Khabib Nurmagomedov, who was at the UFC Apex to corner his cousin, Usman Nurmagomedov, to a victory.

The encounter was a big pat on the back as Gamrot revealed to reporters that Khabib told him, “For sure in the future you meet with Islam in fight.”

Mateusz Gamrot’s win over Tsarukyan elevated him into the top 10 of the UFC lightweight rankings, but White would rather see Gamrot fight Beneil Dariush (21-4-1 MMA, 15-4-1 UFC) than Gaethje.

“Yeah, I think what I love is I love Gamrot-Dariush when (Dariush) comes back,” White told Yahoo Sports.

He continued, “The main event was high level, incredible. I mean, just an amazing fight. And you’re talking about, what, No. 11 and No. 12 in that division. You know what I mean? So yeah, it was special.”

White’s message would indicate that he has moved on from the idea of rebooking Islam Makhachev against Dariush. The pair were scheduled to face off in the main event in of UFC Fight Night 202 in February, but Dariush withdrew after injuring his ankle. Makhachev faced Bobby Green instead and ran through him in one round.

With the UFC lightweight title currently vacant, Makhachev has been campaigning to face Charles Oliveira. Should the promotion decide to go the direction of Gamrot vs. Dariush, Makhachev might just get his wish.