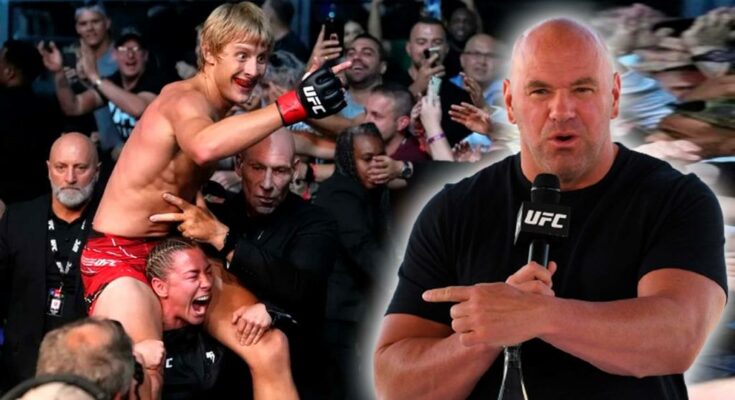 UFC president Dana White is sensing something special out of Paddy Pimblett.

Pimblett (19-3 MMA, 3-0 UFC) has become a high profile name in the sport after just three octagon appearances, the most recent of which saw him submit Jordan Leavitt in the second round of their lightweight bout at UFC Fight Night 208 this past weekend in London.

Dana White has been rather impressed with his newest British superstar and thinks it’s time for a step up in platform.

Paddy Pimblett has been perfect thus far inside the UFC octagon, securing three back-to-back finishes in his first handful of appearances. Starting things off at the UFC Apex facility in Las Vegas, Nevada in Sept. 2021, Pimblett received a raucous ovation after his first-round knockout of Luigi Vendramini despite the small crowd in attendance.

It’s been off to the races in “The Baddy’s” two fights that followed as both took place in London where he’s had his fellow countrymen eating out of the palm of his hand from the start of the walk out to the arena exit. Seeing all the numbers on just his social media accounts alone, the UFC boss, White, is getting a very familiar feeling as the ascent continues for the 27-year-old lightweight prospect.

“This kid — to talk about championship stuff right now, it’s a little too soon, but he’s got that Conor McGregor vibe,” White told media after Contender Series season 6 episode 1.

“I wanna show you something, this is pretty amazing. On my Instagram, this is me, not UFC or whatever … Paddy Pimblett’s faceoff … the main event, the heavyweights, Curtis Blaydes and Tom Aspinall did 203,000 views on my Instagram. Paddy Pimblett’s faceoff did 1.7 million. Isn’t that crazy? I’ll give you another example, ‘F**k It Friday’ is massive. Massive. It did 1.3 million on mine. [Then] it was Molly [McCann] drinking the Howler Head [whiskey] with the thing (wig) on, that did 2 million. So, those two together, yeah, they’re powerful, man.”

Before Pimblett’s most recent victory over Jordan Leavitt this past Saturday, he was getting the feeling that it was time for a change of scenery and that he has begun to outgrow the O2 Arena. Well, he just may get his wish as White seems to have a brief, but solid, idea of where his new star will be headed next.

“I think what we do next is we take him to either Boston or New York and he ends up on pay-per-view then you bring him to Vegas,” White said.