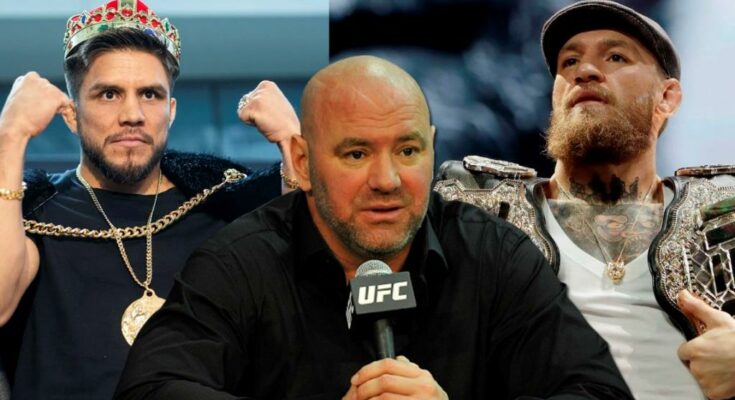 Dana White made light of the recent heated back-and-forth between Conor McGregor and Henry Cejudo on social media. The two former two-division champions indulged in heated banter on social media after ‘Triple C’ pointed out flaws in the Irishman’s boxing technique. Cejudo later even challenged McGregor for a potential clash inside the octagon.

While McGregor never responded to the challenge, Dana White also didn’t pay heed to Cejudo picking on fighters on social media. The UFC president claimed that “talking sh*t” on social media won’t earn Cejudo a fight inside the octagon. White also stressed that Cejudo is still retired as per his knowledge.

He revealed that the former bantamweight champion knows what he must do in order to return to the octagon. During a recent interview with TMZ Sports, White said:

“Cejudo ain’t fighting, he’s not, he’s not fighting. Cejudo’s retired, you know, Cejudo knows what he needs to do to get back in and get whatever, I mean yeah, just talking on Instagram does not get you fights.”

Conor McGregor is currently healing from a leg injury he suffered during the trilogy fight with Dustin Poirier last year. McGregor has been seen training at the Crumlin Boxing Club in Dublin lately, however, he is yet to be cleared to start full-fledged MMA training.

Despite rumors of a potential trilogy fight with Nate Diaz doing the rounds, Dana White revealed he’s yet to pick out the Irishman’s next opponent. White pointed out that McGregor is yet to be cleared to start sparring but once he is, that’s when the promotion will look into finding a suitable opponent for him:

“When he’s 100 percent ready then I’ll start thinking about him and who he’s going to fight and all that stuff but no, not till he gets cleared and gets a date where he can start training,” Dana White said.

Diaz has just one fight left on his UFC contract and seems unwilling to extend the same. In that case, a trilogy fight with Conor McGregor does make sense from a business perspective for the UFC. The fight would attract a lot of eyeballs and sell pay-per-views like hotcakes.

McGregor is also on a losing skid, having lost back-to-back fights last year. It is unlikely that he’ll get an immediate title shot upon his return. If he manages to get past Diaz in a potential clash, the Irishman could make a case for the title shot thereafter.