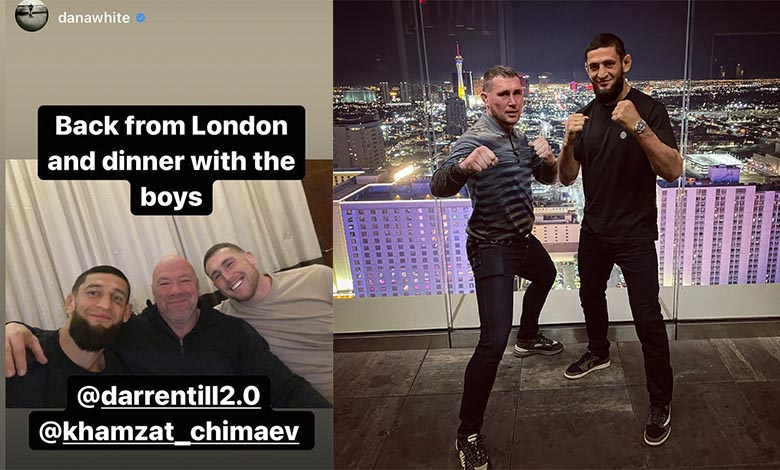 Recently, Darren Till and Khamzat Chimaev seem to be everyone’s favorite duo in the MMA world, including Michael Bisping and even UFC President, Dana White. In the aftermath of a thrilling UFC London event, the boss caught up with Till and Chimaev for dinner.

‘The Gorilla’ has been training alongside Chimaev since traveling to Sweden a few weeks ago. The pair have now made their presence known in the United States as Chimaev prepares for his UFC 273 showdown against Gilbert Burns.

Taking to Instagram, Dana White posted a selfie with the Till-Chimaev duo and captioned it:

“Back from London and dinner with the boys!! @darrentill2.0 @khamzat_chimaev”

Till is currently on the back of a loss to middleweight veteran Derek Brunson. He is taking some time off to improve his game and eventually get back into the octagon.

For his return fight though, the former UFC welterweight title contender could very well cross paths with Uriah Hall. During a Q&A session at UFC London, Till put Hall on notice.

While in conversation with Anthony Smith on the Believe You Me podcast, Michael Bisping described what it was like for him to sit in the backseat of a car with Khamzat Chimaev and Darren Till.

Bisping hilariously claimed that Chimaev drove like a “psychopath” and was out of his mind behind the wheel. The UFC Hall of Famer said:

“We get in the car, [Khamzat Chimaev’s] driving. Now I don’t know if he has a driving license or not. And I don’t know how tough it is to get a driver’s license in Chechnya because the motherf***er is out of his mind behind the wheel of a car. He is driving like a psychopath.”

Khamzat Chimaev will step back into the octagon at UFC 273 on April 9, 2022. ‘Borz’ will compete in a potential No.1-contender fight against Burns. ‘Durinho’ is heading into the bout on the back of an impressive unanimous decision win over Stephen ‘Wonderboy’ Thompson. It remains to be seen if Darren Till will be in Chimaev’s corner or not.

Check out Michael Bisping’s description of his experience with Till and Chimaev: