Dana White reacted to a video of Zhang Weili lifting up Francis Ngannou, which went viral on the internet a few weeks ago 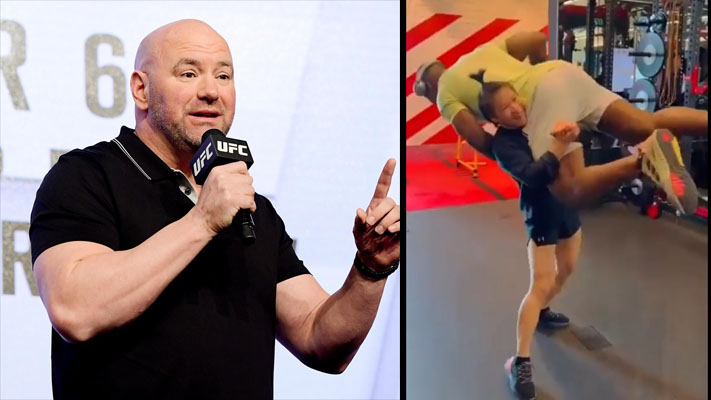 The UFC head honcho couldn’t help but express his awe at the promotion’s smallest champion, picking up the biggest one. Sharing the clip on Instagram, White wrote:

Weili’s video with Ngannou went viral shortly before ‘Magnum’ dethroned Carla Esparza at UFC 281 to regain her strawweight title. ‘The Predator’, while initially scared of Weili hurting her back, couldn’t believe how easily he was lifted off the ground.

Asked about her interaction with Ngannou, Weili joked about considering a move up to heavyweight to challenge ‘The Predator’. ‘Magnum’ even hilariously suggested that the UFC heavyweight champ is not ‘that heavy’.

Zhang Weili was thoroughly dominant in her second-round submission win over Carla Esparza at UFC 281. Although Esparza was fighting in her own country, she was showered with boos while fans cheered for her Chinese opponent.

Weili was surprised to see fans booing Esparza. ‘Magnum’ believes the boos were a result of fans preferring her fighting style over that of the then-champion. The strawweight queen recently told reporters at a UFC presser:

“Yes, I was so surprised. I don’t know why. Maybe more fans like my fight style. I don’t know. Poor Carla… Yeah, I think in world too much fans supporting me. Why I think it’s me, [because] I’m world champion… I don’t think I’m a celebrity. I see myself as an MMA fighter. More and more people are getting into this sport. I believe in the future. MMA sport in China will thrive.”

Zhang Weili is now a two-time UFC champion. She recently discussed her desire to fight flyweight champion Valentina Shevchenko down the line in pursuit of double champion status. However, for the first title defense of her second championship reign, top-ranked contender Amanda Lemos and former foe Rose Namajunas are likely the frontrunners.

Watch Zhang Weili’s appearance at a UFC presser below: