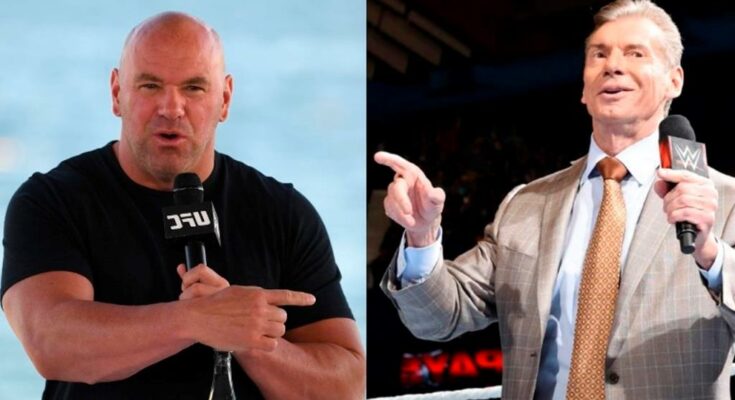 The UFC president expressed his opinion that his relationship with WWE will not change despite Stephanie McMahon and Triple H taking over the company’s leadership from Vince McMahon during a post-fight news conference for season six of Dana White’s Contender Series (DWCS).

White described how Vince McMahon gave him poor seats for Ronda Rousey’s in-ring debut at WrestleMania 34 during the conversation.

Even Triple H and Stephaine McMahon were present at the occasion where he was mistreated, according to the 53-year-old:

“I TELL YOU I WAS IN THE FU**ING RAFTERS… PEOPLE WERE COMING UP TO ME AND GOING, WHY ARE YOU SITTING IN THESE SEATS. WELL, I SAID THIS IS WHERE THEY SAT ME SO F**K THEM I’M GOING TO SIT RIGHT HERE… TRIPLE H AND STEPHAINE WERE THERE TOO. IT’S NOT LIKE IT WAS JUST VINCE. THIS WASN’T LIKETWENTY-FIVEE YEARS AGO.”

View the complete interview below:

The UFC president continued, saying that WWE’s impolite act made him aware that they didn’t respect him at all:

“They let me know what they thought of me at that event… When you run an event like we run and you have people that you know are coming. That you give a s**t about or respect, you make sure they are f***ing taken care of.”

In addition, White claimed that he gave Vince McMahon much better seats at UFC 276 when the former WWE Chief Executive attended.

Dana White said during the UFC 223 news conference that he would support Ronda Rousey at WrestleMania 34 rather than former UFC heavyweight champion Brock Lesnar.

In addition, White claimed that he was unaware that “The Beast Incarnate” was scheduled to compete at WrestleMania:

“[GOING TO WRESTLEMANIA 34] FOR RONDA. I DIDN’T EVEN KNOW BROCK WAS IN IT… SWEAR TO GOD, DIDN’T KNOW THAT. I’VE BEEN A LITTLE BUSY.”

Below, you can see Dana White discuss WrestleMania 34:

At the event, Ronda Rousey undoubtedly made an impression on her old boss. The former UFC women’s bantamweight champion and Kurt Angle defeated Triple H and Stephaine McMahon on the April 8, 2018 show.

Additionally, there were whispers in 2018 that Brock Lesnar might make a UFC comeback. The former WWE star hasn’t entered the octagon since his no-contest fight with Mark Hunt at UFC 200.