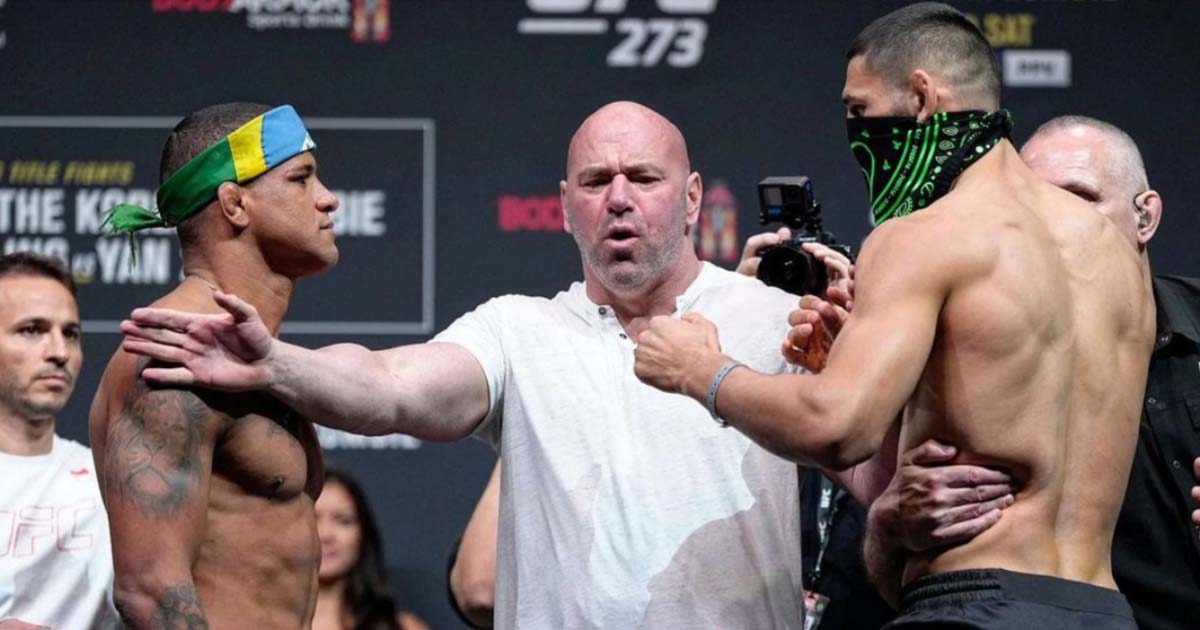 Khamzat Chimaev vs. Gilbert Burns may not be the UFC 273 main event. However, as per Dana White, fans seem to be looking forward to this welterweight showdown the most.

In his most recent interview with TMZ Sports, Dana White said that when it comes to social media, Burns vs. Chimaev is outperforming UFC 273 headliners.

“It’s trending very well, man. This thing is trending to be big for us. It’s sort of one of sleeper fights. That came up out of nowhere and blew up. Like you said, everybody’s talking about anything you post online that has anything to do with Chimaev, and Burns is outperforming the main and the co-main event by six to seven times. And it is an interesting card.”

At UFC 273, Khamzat Chimaev will be looking to secure his 11th consecutive win as he takes on Gilbert Burns in a fight being dubbed a “real main event.” Following his most recent submission victory against Li Jingliang, the undefeated 27-year-old secured the 11th spot in the UFC welterweight rankings. ‘Durinho’ is placed second in the same rankings.

UFC 273 will take place on Saturday, April 9 at the VyStar Veterans Memorial Arena in Jacksonville, Florida. This will be the promotion’s fourth pay-per-view of 2022 and is headlined by two title fights.

In the main event, Alexander Volkanovski will defend his UFC featherweight title against former title challenger Chan Sung Jung. Furthermore, Aljamain Sterling and Petr Yan will meet in a rematch that will serve as the co-main event.

Khamzat Chimaev keeps himself busy outside the octagon and the gym. Most recently, ‘Borz’ and Darren Till, decided to launch their own NFT collection under the ‘Smesh Bros’ banner.

These tokens are produced in collaboration with Blockasset. Both fighters will release 2000 NFTs, each with randomly generated artwork by Dosbrack.

This is an obvious attempt to capitalize on ‘Smesh Bros’ popularity, as both athletes racked up over five million views in five weeks on the Blockasset YouTube channel.

Both athletes’ tokens are scheduled to be released in the next few months. There will be an option to exchange them for various experiences and memorabilia including meet and greets, sporting event tickets, ‘Smesh Bros’ merch, signed sportswear, and the ability to vote on the upcoming’ Smesh Bros’ content.