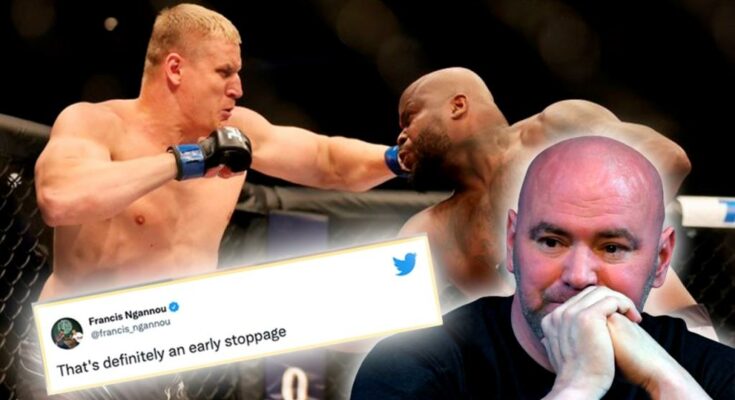 Pavlovich drilled Lewis in the head with a series of stunning punches. Lewis retreated while Pavlovich chased him down and continued his barrage. Miragliotta dove in after a sequence in which Lewis landed face down on the canvas. But immediately after Miragliotta stepped in, Lewis protested.

Although Lewis unquestionably was staggered and hit the canvas, he immediately protested the stoppage when Miragliotta jumped in to wave it off. The crowd showered the octagon with boos, fellow fighters complained on social media, and only Pavlovich and his team were left happy.

“I think it was too soon, but to be fair – I think Miragliotta’s a great ref – the way that he fell, probably nine out of the 10 people in this room would’ve jumped on him and stopped the fight, including me,” White told reporters, including MMA Junkie, at the UFC 277 post-fight news conference. “I like the ref, but I wouldn’t really debate that was an early stoppage. That was definitely an early stoppage.

“When you jump right back up like that and you’re ready to go – listen, he was a little rocked, but no more rocked than Julianna (Peña) was three, four times in the fight, and she fought five rounds. Miragliotta made a mistake, and it happens. So I don’t think it diminishes Derrick Lewis at all. I would’ve liked to see that fight go on.”

With the defeat, Lewis has now dropped three of his past four. White said he doesn’t think the result will hurt Lewis, though, and still expects the UFC’s record holder for most knockouts to be relevant in the weight class.

With the victory, Pavlovich extended his winning streak to four to go with wins in that stretch over Marcelo Golm, Maurice Greene and Shamil Abdurakhimov.

Lewis’ struggles to get into the win column continue. He now has lost three of his most recent four, including back-to-back TKOs to Tai Tuivasa and Pavlovich.