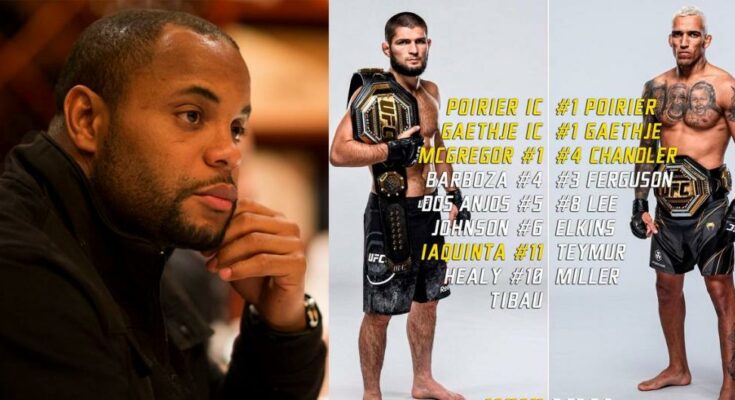 Khabib ‘The Eagle’ Nurmagomedov retired following his win over Justin Gaethje in October 2020. Despite his retirement, the UFC did its best to try and lure him back into fighting. However, the attempts all failed, and Nurmagomedov vacated the lightweight title in 2021.

Despite that, many fans still hope for his possible return. To date, no fights have sparked much interest in Nurmagomedov.

However, Daniel Cormier has an idea of what might be able to do it. The former dual-weight champion discussed a possible return on the DC & RC podcast.

Daniel Cormier speculated that it’s possible that Khabib Nurmagomedov could return under the right circumstance. That right scenario is if Charles Oliveira defeated his friend Islam Makhachev for the UFC lightweight title. The two contenders are rumored to clash later this year.

“When you lose a dominant champion like Khabib Nurmagomedov, sure he didn’t all the title defenses. But, when a guy leaves the weight, and leaves the belt behind, and then a guy comes behind like Charles Oliveira, and he starts to dominate the class like he has, you start to question. Man, it would nice to see him fight Khabib right? Many people have said that, it would be nice to know.”

Daniel Cormier continued, “What better way to draw him back in, then to have Oliveira beat his friend, training partner? It’s another way to try and draw him in because Dana has thrown so much money at Khabib to try and get him back and that hasn’t been enough. But what if, defending his friend’s honor is enough if Islam doesn’t get the job done? I just think there’s a lot of reasons to make this [Charles Oliveira vs. Islam Makhachev] fight.”

UFC lightweight contender Islam Makhachev believes that he would beat Charles Oliveira on the ground.

In the interview, Islam Makhachev opined that he would dominate Charles Oliveira. He also believes that he would win the fight on the mat as well and that he would finish the Brazilian. He also gave his thoughts on a possible matchup between Oliveira and his friend Khabib Nurmagomedov.

“[Oliveira] said I don’t deserve this, but he’s asking about Nate Diaz and Conor [McGregor]. I think Charles is a No. 1 contender now. We don’t have a champion because he don’t make weight. He is not a professional… This is like an easy fight for Khabib. Khabib had the most dominant grappling from top. He’s going to take him down, hold him there. Very easy. I honestly think this is a very easy fight for Khabib. Stylistically, all of [Oliveira’s] pressure is not going to work against Khabib because Khabib pressures all of his opponents.”