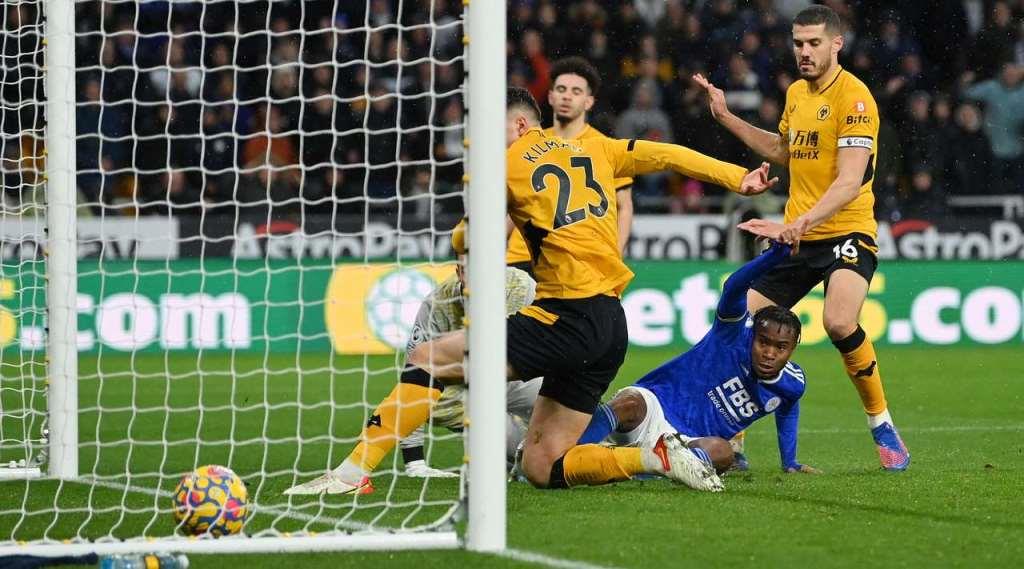 The visitors’ last away PL clean sheet had come 378 days ago at Molineux, with the ‘Foxes’ playing 17 league matches on the road in that time.

In no mood for another home blank against their midland rivals, the hosts made sure that abysmal streak would continue inside just nine minutes, after Leicester failed to clear Podence’s cross from the left.

Hardly able to believe his luck, Raul Jiménez laid the ball off to Ruben Neves on the edge of the box, and he curled a trademark strike past an unsighted Kasper Schmeichel.

Having only shipped 17 goals this campaign, Wolves might have hoped to press on for an easy victory to sustain their charge for European qualification.

However, their inability to consistently kill off home games manifested itself again just five minutes before the interval, after Jiménez fumbled one-on-one with Schmeichel.

That mistake allowed Çağlar Söyüncü to make a tackle and launch a counter offensive, which was finished by Ademola Lookman, who needed only to tap in Marc Albrighton’s cross inside the six-yard box.

As the second half commenced it was Leicester’s turn to prove that wastefulness can come back to bite. Youri Tielemans and Albrighton both spurned chances inside the box, and with 65 minutes gone, all it took was one opportunity for an otherwise introverted Wolves side to retake the lead.

The ball was worked to Podence from 20 yards out, and the winger arrowed a low shot into the bottom left corner, with VAR confirming the goal following the visitors’ complaints of Jiménez’s offside run in front of Schmeichel.

Not even the late introduction of James Maddison could salvage a point for Brendan Rodgers’ side, whose first loss to Wolves in six matches sees them stranded five points behind tenth-placed Southampton, albeit with three games in hand.

Meanwhile Wolves move back ahead of Tottenham into seventh, with Europe firmly in their sights.