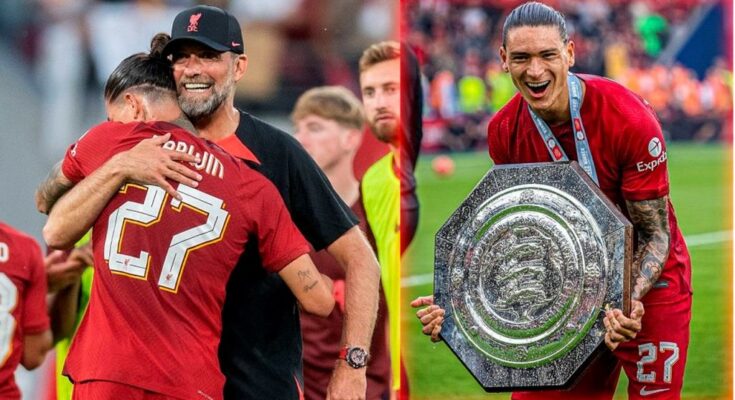 Liverpool striker Darwin Nunez has opened up about settling into life at his new club. He admitted he was nervous initially, but his teammates helped him feel comfortable in his new surroundings.

Nunez, who joined the Reds from Benfica for an initial fee of £64 million in June, turned heads with his performance on his club debut. Coming on as a second-half substitute against Manchester City in the Community Shield, he won a penalty and also scored a close-range header.

Speaking to Sports Centre (via Anfield Watch), the 23-year-old shed light on how superstar Mohamed Salah and forward Luis Diaz helped him feel at home in north-west England. He said:

“To be honest, the first weeks I was extremely nervous, so much that I was missing even the simplest pass. It was difficult to get used to being with the team at the beginning. But as time went by, they made me feel comfortable. I had a talk with Salah that helped me a lot. Then with the Brazilians, with Luis Diaz, who is also a new guy here.”

“It’s really difficult to come to a big club like Liverpool and not to feel that pressure. I felt that. The manager (Klopp) has talked a lot with me. He’s always pushing me forward and has given me the trust, and I aim to pay that trust back on (the) pitch.”

Earlier, the Uruguayan came under fire for his poor pre-season performances but bounced back with a 20-minute hat-trick against RB Leipzig in a friendly last month. After scoring his first competitive goal for the club on Saturday, he’ll look to build on his momentum.

Liverpool are scheduled to open their new Premier League campaign at Fulham on August 6.