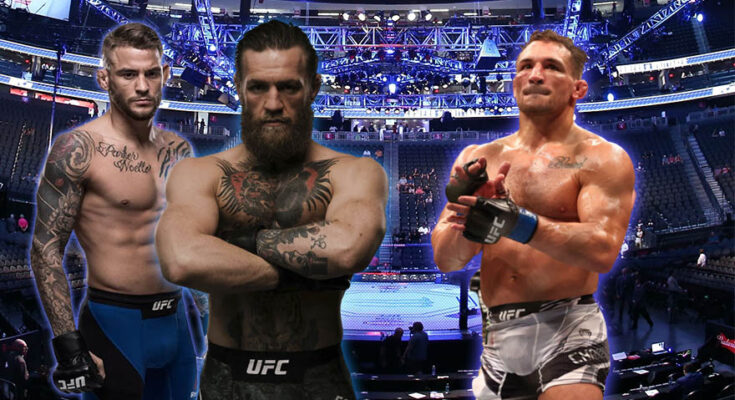 UFC lightweight contender Dustin Poirier believes that both him and rival Conor McGregor would present “dangerous” matchups for Michael Chandler.

At UFC 274, Chandler thrilled those in attendance at the Footprint Center and fans watching around the world with one of the most memorable knockouts of all time. With a brutal front kick, the former Bellator champion slept 155-pound veteran Tony Ferguson.

And to kick off the second round, Chandler came out with everything, throwing a soccer-like kick down the middle and connecting flush on Ferguson. Immediately, Ferguson dropped to the canvas and the fight was called off.

After the victory, Chandler cut an incredible promo, calling out the winner of the main event between Oliveira and Gaethje, or opting to welcome former champ-champ Conor McGregor back to action.

While MMA superstar Conor McGregor received the callout with the most enthusiasm, one notable contender was missing: “The Diamond.”

When Poirier pointed out his omission, he was met with disdain from Chandler, who claimed that he has no interest in facing the former interim titleholder after the comments that he made upon the 36-year-old’s arrival in the UFC.

But should he continue to dismiss talk of fighting Poirier and pursue a money fight with McGregor, the Louisianan has suggested that “Iron” Mike will run into similar dangers as he would sharing the Octagon with him.

During a recent appearance on THE FIGHT with Teddy Atlas, Poirier discussed potential bouts for Chandler, suggesting that both he and McGregor, whom he’s gotten to know well in three Octagon collisions, would present dangerous challenges for the #4-ranked lightweight.

“If you’re getting hurt by Tony Ferguson and dropped by (Charles) Oliveira, guys like me, guys like Conor, if we touch your chin, it’s gonna be bad,” added Poirier.

There are many guarantees when Chandler enters the cage, including entertainment, blood, bruising, knockdowns. From finishing Dan Hooker in round one and recovering from early adversity to stop Ferguson to being on the receiving end of a comeback against Charles Oliveira, it’s clear that Chandler ins’t afraid to go fist-for-fist inside the cage.

But Poirier believes that approach could be a detriment for the former title challenger, who seemingly favors offense from the word go rather than a balanced strategy, something his Fight of the Year-worthy war with Justin Gaethje appeared to prove last November.

“That’s the reason why he gets hurt in these fights, you (need to) have an offense and a defense, and he’s all offense, jumping forward, leaping forward,” said Poirier.

Poirier is currently in Florida training ahead of a desired return to the Octagon this summer. Should McGregor not be ready anytime soon and Chandler change his tune on facing “The Diamond,” it seems that the #2 contender will be ready to throw down at the drop of a hat.