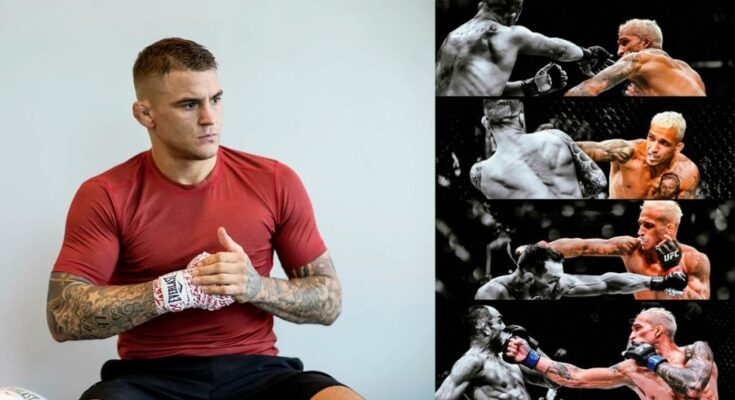 Former UFC title challenger Dustin Poirier assessed the situation surrounding Charles Oliveira, who lost his belt before his fight against Justin Gaethje because he exceeded the lightweight division limit by 0.5 pounds.

Poirier stood up for his former opponent and stated that the Gaethje fight should be seen as a successful defense of Oliveira, despite the fact that he officially lost the title before the fight.

During his recent appearance on The MMA Hour, Poirier gave his take on Oliveira’s controversial weight miss. He highlighted that it was unfair to the former lightweight champion that his first-round submission victory over Gaethje wouldn’t count as a defense of his title.

“I don’t know, bro. That’s tough. That’s a tough line to call… That doesn’t count as a [title] defense now. You know, that’s part of his legacy. He’s beating the best guys out, you know, every time. Now he can’t say he beat Gaethje in his hometown, in a title defense, because it’s not on paper.”

“That was a defense for Charles for sure.”

Poirier compared the entire situation to the infamous Yves Edwards vs. Josh Thomson bout at UFC 49 back in 2004. Edwards delivered a highlight reel knockout to dispatch Thomson, cementing his status as the best lightweight in the world, despite the fact that the 155-pound title wasn’t on the line.

Charles Oliveira is now the No.1 contender in the lightweight division. At the UFC 274 post-fight press conference, UFC president Dana White confirmed that the Brazilian will fight for the vacant title in his next bout.

Check out Dustin Poirier’s appearance on The MMA Hour below: