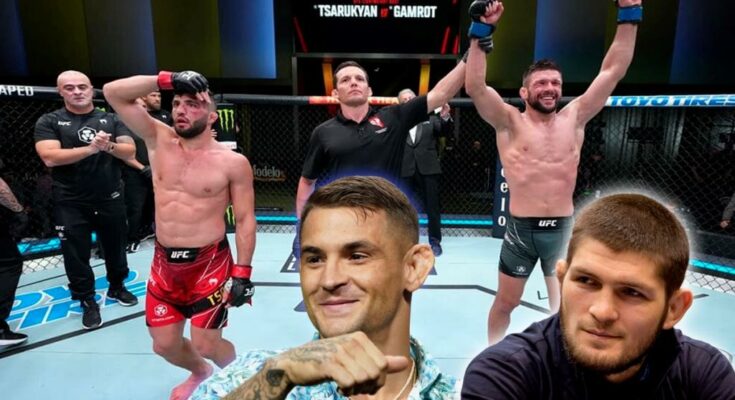 As advertised, the main event battle between Arman Tsarukyan and Mateusz Gamrot turned out to be an absolute thriller.

Tsarukyan (18-3 MMA) had entered the contest sporting a five-fight winning streak, his latest being a second round TKO victory over Joel Alvarez from back in February. The Armenian-Russian was 5-1 since joining the UFC in April of 2019, with his lone loss coming against top contender Islam Makhachev.

Meanwhile, Mateusz Gamrot (21-1 MMA) was coming off three straight stoppage wins, his most recent being a TKO victory over Carlos Diego Ferreira from back in December. The former KSW lightweight champion had gone 3-1 since joining the UFC ranks, with his lone loss coming by split decision to Guram Kutateladze.

It was a competitive affair, with both men finding success at various points in the fight. Ultimately, though, Gamrot convinced all three judges that he deserved to have his hand raised after five rounds. Sal D’Amato, Chris Lee, and Ron McCarthy were all on the same page, scoring the bout 48-47 in favor of the Polish fighter.

UFC Vegas 57 main event proved to be a thrilling back and forth technical fight. Arman Tsarukyan had the better success in rounds one and two, but Mateusz Gamrot began to claw his way back in round three. Round four proved to be another closely contested contest and fans scorecards were all over the place heading into round five. The final five minutes was back and forth once again but Gamrot appeared to get the better of Arman in the frame.

Here’s how the pros reacted to the results of UFC Fight Night: Tsarukyan vs. Gamrot:

It’s safe to say that Khabib Nurmagomedov can’t get enough of the action. The former undefeated lightweight champ hopped on Twitter to chime in with his thoughts.

Lightweight star Dustin Poirier was pleased with the night’s results. ‘The Diamond’ took to Twitter to congratulate his American Top Team teammates Gamrot and Thiago Moises, who were both victorious in their fights.

Former UFC light heavyweight titleholder Jan Blachowicz extended his regards to his fellow Pole. Meanwhile, Belal Muhammad pointed out that Tsarukyan is still a future champion in his books.

Mateusz Gamrot made it clear that he wants a top-ranked lightweight as his next opponent. During his post-fight interview, ‘Gamer’ revealed that he has his sights set on former two-time title challenger Justin Gaethje.

Gaethje is coming off a failed title bid against Charles Oliveira in his most recent outing. ‘The Highlight’ hasn’t responded to the call-out as of this writing.