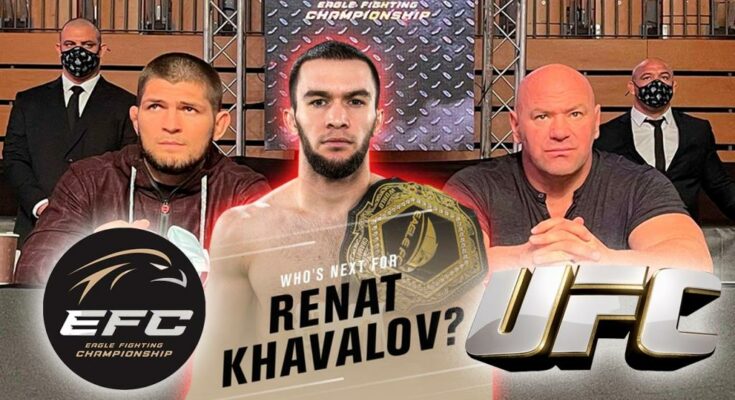 Watch the video below as Renat Khavalov stops Ramazan Amaev in the third round and remains the bantamweight champion:

Renat Khavalov warned White to prepare his fighters as he is coming for them soon. The Dagestani fighter said in his post-fight interview:

“In conclusion, I’ll say… Dana White- get your guys ready. I’ll come for them soon.”

Renat Khavalov also stated that he is taking career advice from former UFC lightweight king and Eagle FC chief Khabib Nurmagomedov. The Eagle FC bantamweight champ seems focused on heading to the USA to create headlines on the world stage:

“Khabib gave a little praise, but I need to make it to America. I need to put in more work. I’ll rest for a week or two, like Khabib said, then right back to the gym. I’m ready to go to America. I’m sure I’ll destroy everyone there.”

Shamil Zavurov, president of Eagle Fighting Championship, says that the fight league’s backer, Khabib Nurmagomedov, is paving a path for a new generation of Russian fighters to make their mark at the top level of global MMA.

For all the countless hours spilling blood, sweat and tears in the training room, all that some fighters need to make their mark is a big break.

For Khabib, that came in early 2012 when the then 16-0 fighter took his first steps in the UFC’s cage in a journey which would eventually lead to a world title and the status of the world’s top pound-for-pound fighter.

The undefeated (and recently retired) Khabib stepped out of the limelight last year after defending his UFC lightweight championship against the gritty American Justin Gaethje, and has worked since then to switch the focus to the next generation of Russian fighters following in his footsteps, with his cousins Usman and Umar, as well as the highly thought of Islam Makhachev battling their way to the top of the list.

“They discuss it every time they meet. I believe that at every meeting Khabib will try to get some of our top fighters signed to the UFC. We have an oral agreement with our fighters that if they prove themselves in our league we will push to get them signed to the UFC. Nobody will hold them in EFC.” h/t RT Sport