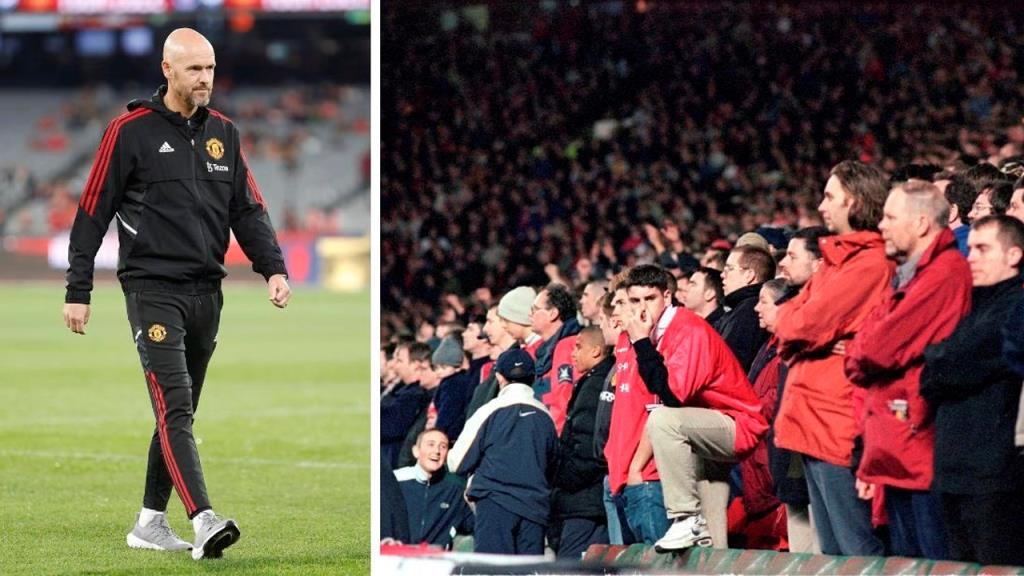 Manchester United boss Erik ten Hag has sent out a plea to the Old Trafford faithful ahead of the club’s clash with Liverpool on Monday, August 22.

The Red Devils supporters have planned a boycott of the team’s upcoming league match, with the club’s ownership by the Glazers being the major sticking point.

Speaking during a press conference ahead of the third round of fixtures, the Dutch manager appealed to the fans to reconsider their stance. When asked about his opinion on the planned fan protests, the former Ajax boss said (via Manchester Evening News):

“I can only say, the owners want to win. We want the fans behind the team. I am not that long at the club. I can see all the background. We have to fight together.”

Manchester United have looked out of sorts so far this season, losing their two opening matches to Brighton & Hove Albion and Brentford, respectively. These losses have seen the Red Devils sit at the bottom of the table with a tough fixture against Liverpool on the horizon.

The Merseyside club, who walloped Manchester United 9-0 on aggregate in the league last season, head into the fixture in far-from-stellar form. Jurgen Klopp’s side have drawn two of their opening two games so far this season and will hope to secure their first win of the campaign at Old Trafford.

Ten Hag will hope he can get the support of the fans, with the club’s poor run raising alarm bells in every sector connected to the Red Devils. Nevertheless, it remains to be seen if the Old Trafford faithful will reconsider their stance ahead of Monday’s fixture. However, given the fans’ continued displeasure with the club’s current ownership, new ownership might help the club mend its ways.

Despite completing Casemiro deal, Manchester United won’t have his services against Liverpool

Manchester United have had a rather scatterbrained chase for different players, with Adrien Rabiot and Marko Arnautovic getting linked to the club recently.

However, after a series of failed transfers, the club have been able to sign Real Madrid midfielder Casemiro later on Friday, August 19. According to transfer expert Fabrizio Romano, the 30-year-old has signed a four-year contract with the Red Devils for a deal worth €70 million.

The Brazilian has played 336 matches for Real Madrid, scoring 31 goals and providing 29 assists across all competitions.

While Casemiro’s arrival is surely going to be good news for the Old Trafford faithful, he will not be a part of the squad for Monday’s game against Liverpool. This is due to Premier League rules which require new signings to be registered by 12pm on Friday.