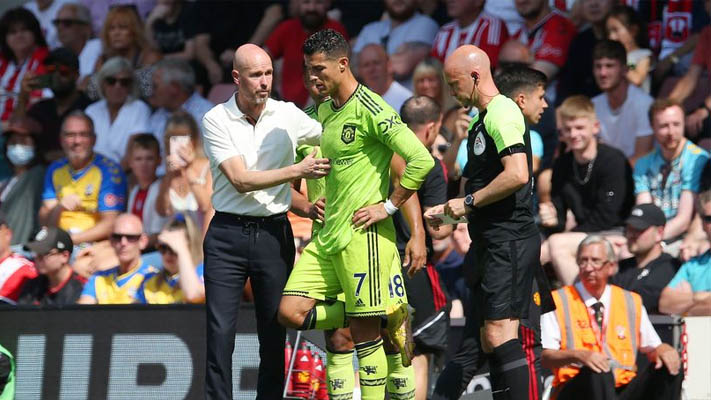 Telling a player that they are no longer in a team’s starting line-up is never an easy job for a manager. When that player has won five Ballon d’Or awards, it becomes that little bit harder.

Cristiano Ronaldo missed United’s pre-season, citing family issues as the reason for his absence. Ten Hag named him on the bench for the opening day 2-1 defeat to Brighton at Old Trafford, and although the 37-year-old did come on shortly after the second half had started, he was not able to help his team back into the match.

The Portugal international was then reinstated to United’s starting XI for their next match against Brentford – fans will not need reminding of the outcome. Since the sobering defeat in the capital, Cristiano Ronaldo has only played 80 minutes in the Premier League in United’s subsequent four games against Liverpool, Southampton, Leicester and Arsenal.

The former Real Madrid man scored 18 league goals last season, yet Ten Hag has opted to use the United forward off the bench for the majority of the campaign. No matter how experienced a manager is, telling Ronaldo that he does not feature in the starting line-up would have been a difficult conversation.

However, Ten Hag would have anticipated Ronaldo’s reaction to the news. During his time at Ajax, the Dutchman detailed how he handles conversations with players who are not being selected for the first team.

He told his former club:

“That’s one of the most difficult bits, but you can’t run away from it. What’s important is that you do it with a clear consciousness and that the team’s needs come first, above everything else. Then you make the choices you have to make.

“In many cases, they [the players] won’t understand that. A player thinks about himself, as he should. Of course, they want to win with the team, but they also have to look at their own career. They want game time, nevertheless, they’ll have to sacrifice that for the greater goals of the team.”