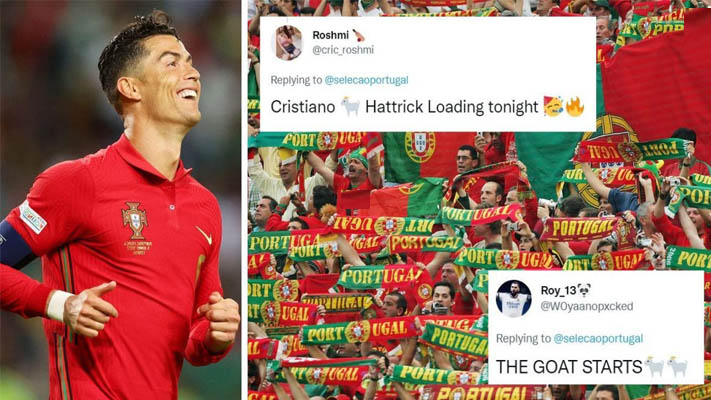 Portugal fans are elated as Cristiano Ronaldo has been named in Fernando Santos’ starting XI for their UEFA Nations League clash with the Czech Republic on September 24.

Ronaldo is the all-time international football’s leading goalscorer sitting on 117 goals in 189 appearances.

He can add to that tally against the Czechs in tonight’s encounter at the Sinobo Stadium in Prague.

The legendary forward came out this past week and vowed to play at both this year’s FIFA World Cup and the UEFA European Championships in 2024.

“I am in a national team with many young players still, with an extraordinary future and obviously, I want to be part of this World Cup and the European Championship as well – I will take over right away.”

The Portuguese backline has impressed in the Nations League, having conceded just two goals in four fixtures.

Ruben Neves and William Carvalho are in midfield with Bruno Fernandes sitting in an advanced role in front of the duo.

Cristiano Ronaldo’s inclusion has enthused Portugal fans and here are some reactions from the supporters on Twitter:

There is a reason Portugal are among the favorites to win the World Cup in Qatar given the squad at Santos’ disposal.

They boast real experience along with youthful talent with a mix of the likes of Cristiano Ronaldo, Leao and Silva.

Their defense has been impressive in the Nations League, having shipped just the two goals.

The Manchester City defender will surely be on the plane to Qatar come November time.

There are not many weaknesses to Santos’ side and they are an even more imposing squad than the one that lifted the European Championships back in 2016.

Portugal kick off their World Cup campaign against Ghana on November 24 whilst their group also contains Uruguay and South Korea.

There was a feeling that this would be the last international tournament of Cristiano Ronaldo’s career.

However, his words this past week are testament to the immense passion he has in playing for his country.