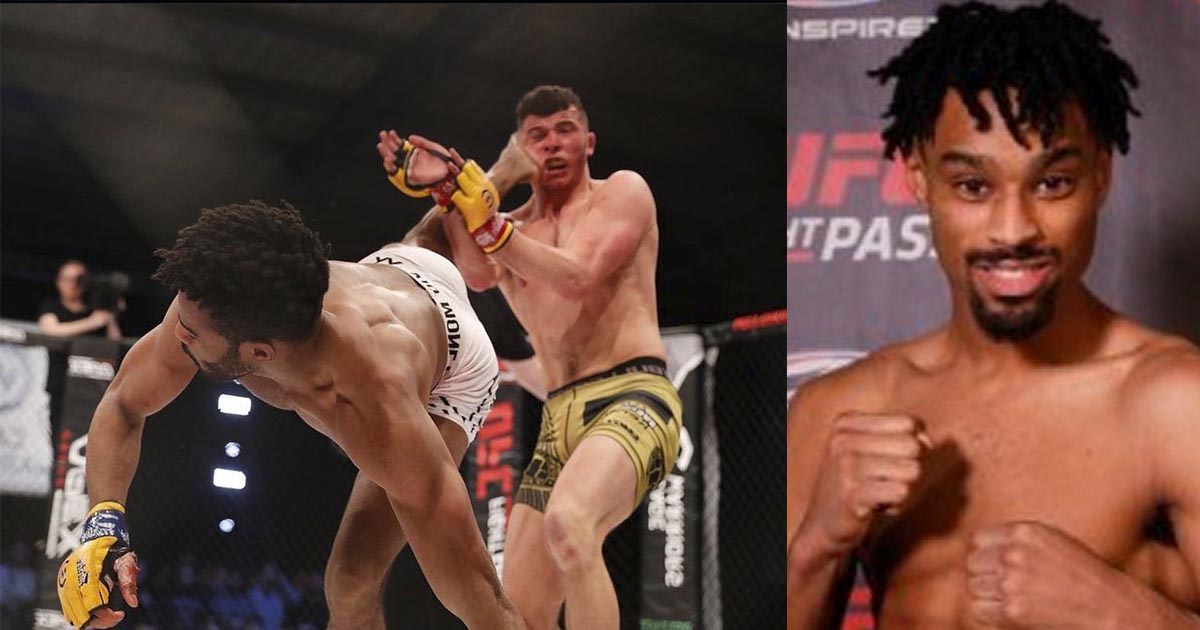 Manny Akpan floored his opponent with a capoeira kick KO.

Manny Akpan might not yet be a household name in mixed martial arts but the English MMA rookie scored a sensational knockout during his Cage Warriors scrap with Connor Hitchens on Saturday night, and it has fans talking.

Akpan, who was competing in just his fourth professional fight at the event in Manchester, England served notice that he could be the next MMA star to emerge from Great Britain after he launched a sensational spinning kick which connected flush to Hitchens’ jaw and sent him tumbling to the canvas.

Akpan immediately followed his foe to the ground, where he landed a a couple of follow-up shots to the badly dazed Hitchens before the referee interjected and called off the contest.

The finish came less than 30 seconds into the second round.

The concussive shot got Akpan back to winning ways after he dropped his last fight by submission, and hands Hitchens his second loss on the trot after he began his career by wracking off six straight wins.

But judging by the responses online, Akpan could go through his entire career without scoring a finish quite as spectacular as the one which had fight fans salivating on Saturday night.

“You never see this ever land so this is amazing,“ wrote one fan in response to the footage.

“That was wicked, the face plant after the head kick is quite the double whammy,“ agreed another.

Another commenter said that the fight-ending blow was akin to someone “playing UFC 4 and trying new moves” in the popular video game.

Akpan’s spinning kick was the highlight of a night of spectacular finishes at the Cage Warriors event, which also included a flying knee knockout and an outstanding left hook.

Cage Warriors is among the most reputable mixed martial arts promotions in Europe and has produced a conveyor belt of talent towards the UFC, including Conor McGregor, Michael Bisping, Arnold Allen and the UFC’s latest superstar, Paddy ‘The Baddy’ Pimblett.

And judging by the evidence, we may soon have to add Manny Akpan to that list.