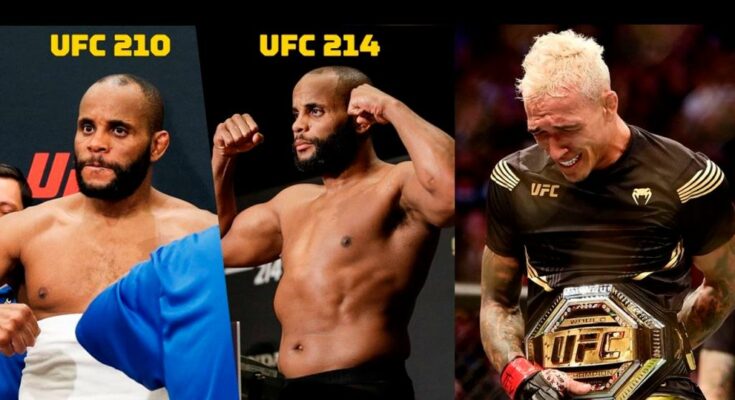 Ever since the official weigh-ins at UFC 210, Cormier has held strong in his conviction that he did not cheat when he recorded his official weight for the second time for his title fight against Anthony Johnson.

Daniel Cormier is now officially a member of the UFC Hall of Fame’s Modern Wing, and had a few things to get off his chest during his induction speech

Now that his legacy has been immortalized on the pages of the UFC history book, the former two division champion decided it was about time to confess to his crimes.

At UFC 210 in 2017, Cormier struggled with his weight cut and ended up going over the light heavyweight division’s limit on his first attempt. When he returned to tip the scales a few moments later, Cormier stripped naked and stood behind a towel before it was announced that he had miraculously made the 205-pound mark.

During his Hall of Fame speech, the former champ-champ finally shared the full version of the story:

“Guys, I want to tell you something, because I think right now is the time to be completely transparent. I think I may have grabbed the towel in Buffalo. I walked back to the back after missing weight by 1.2 pounds, it was 1.2. I tried to give it up guys, trust me, I tried to give it up. I had a pound to lose, they even went and called my wife to try to get me back in the tub.”

However, not everyone seemed pleased with Cormier’s honesty. Some MMA fans hopped on social media to provide their take on the incident.

Fans weren’t necessarily mad at Daniel Cormier after he confessed to his infamous towel trick. However, they pointed out that Charles Oliveira shouldn’t have been stripped of the lightweight belt if ‘DC’ got away with going over by 1.2 pounds.

A Twitter user who goes by the handle @THATSHITmcCRAY, pointed out that, in hindsight, it was unfair for Oliveira to lose the belt by half-a-pound. His sentiments were echoed by @BarryMacokner94 and @yodalorian9, who said the UFC should give ‘Do Bronx’ his title back.

A netizen, who goes by @Midnytegold, believes Cormier should not have confessed and took the secret to his grave. Twitter user @ricci_kitchen also thought it was strange for Cormier to admit to “blatant cheating” on the night of his induction, while @Nunzio_p1 was unhappy that ‘DC’ made light of the situation.

However, there are also a few who believe Cormier’s offense was water under the bridge. Twitter user @kevstuhh that there wasn’t anything the UFC could do now that ‘DC’ has long been retired. On the other hand, @NinerTribe004 thinks Cormier would have beaten Anthony ‘Rumble’ Johnson with or without the extra 1.2 pounds.