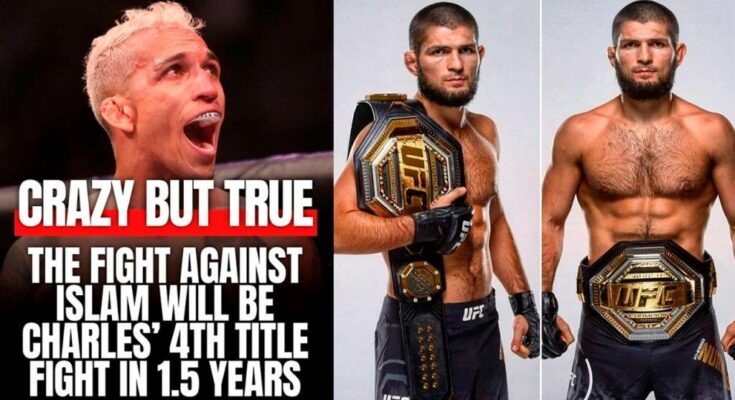 Khabib Nurmagomedov has long been rallying his teammate Islam Makhachev to fight Charles Oliveria for the vacant lightweight title. The former lightweight champion is now extremely excited about his protege going up against ‘do Bronx’ at UFC 280 in October at the Etihad Arena in Abu Dhabi.

Nurmagomedov recently posted an edited Instagram video, replicating the moment when Bruce Buffer announces the main event fight for Oliveira vs. Makhachev. ‘The Eagle’ also hailed Oliveira as the best UFC fighter of 2022 and one of the best on the entire roster irrespective of weight classes. The Dagistani native wrote in the caption:

“Just goosebumps from waiting. Islam Makhachev is coming out for this fight against the best fighter at the moment in UFC. Oliveira is the best fighter of 2022. He is one of the best, regardless of the weight category, also goes on a 12-win streak in the UFC. This fight will answer all questions. Someone reads history, and someone writes it. Prepare your excuses, we aim to win Oliveira ahead of schedule InshaAllah.” translated from Russian via Google

Fans can’t stop praising Charles Oliveira for his exceptionally active title run. An Instagram account named CombaTalk pointed out that Oliveira’s upcoming bout against Islam Makhachev will be the Brazilian’s fourth title fight in a year and a half.

It should be noted that the UFC 280 bout against Makhachev will technically be Oliveira’s third title fight as he was stripped of the title ahead of his last bout against Justin Gaethje. However, fans continue to hail him as the uncrowned champion while commending his active run.

Several fans also compared Charles Oliveira’s run to that of former lightweight champion Khabib Nurmagomedov. ‘The Eagle’ registered four title wins in his entire run, which lasted around two and a half years. A user named @samedmks wrote:

Many consider Oliveira to have paralleled Nurmagomedov’s achievements within a short span.

Others simply had words of praise for ‘do Bronx’, hailing his meteoric rise to UFC glory. Another user with the handle @ray.siff commented: