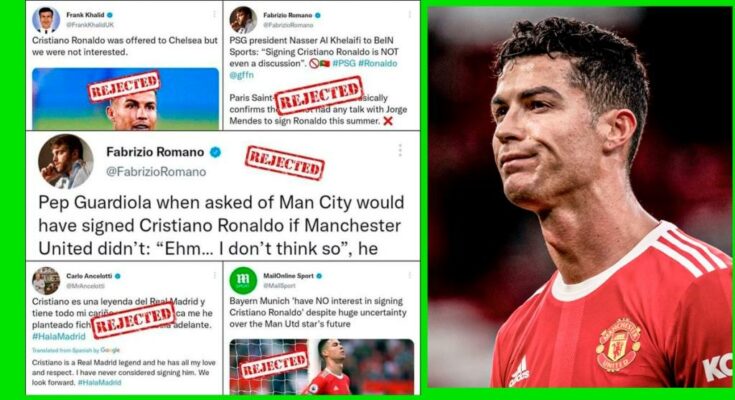 Transfer expert Fabrizio Romano has provided an update on Manchester United forward Cristiano Ronaldo’s future at the club and fans have reacted to it.

Some accused Ronaldo’s agent Jorge Mendes of “hawking him like snacks” while some believed it was a tactic to put pressure on the Red Devils.

As per Fabrizio Romano, Mendes has been discussing a transfer for the Portuguese ace with various clubs this summer. Bayern Munich have already rejected the offer.

Manchester United understandably want their talisman to stay. However, their lack of signings in the transfer market so far has perhaps rubbed Ronaldo the wrong way.

“Cristiano Ronaldo situation. #MUFC Man Utd insist he’s not for sale, as they want him for next season. Mendes discussing with clubs to explore options, Bayern said no. Cristiano likes ten Hag but wants to see ‘ambition’ on the market.”

However, he couldn’t prevent the Red Devils securing their worst ever points tally in the Premier League (58) as they finished sixth. They also extended their trophyless run to five years and were often in shambles on the pitch.

Hence, Ronaldo’s future has come under the scanner as well, and fans took to Twitter to react to Romano’s update regarding the 37-year-old.

Here are some of their reactions:

With new manager Erik ten Hag coming in, there was hope that United would strengthen their squad this summer. However, they have made no signings so far while teams around them have made multiple signings.