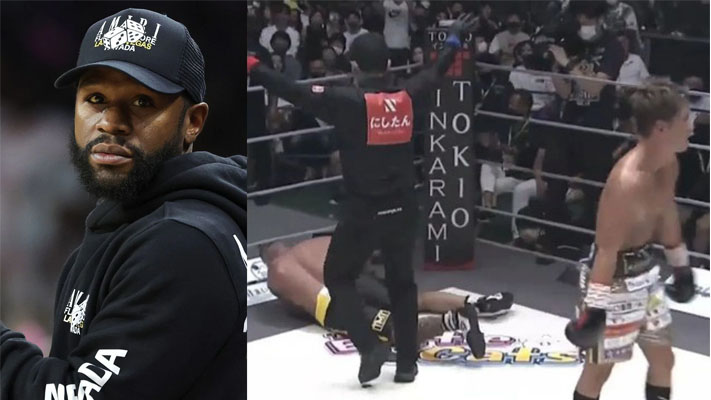 Floyd Mayweather’s bodyguard ‘Jizzy’ Mack, whose real name is Ray Sadegh, was dropped by a Japanese kickboxer in the co-main event of his boss’ exhibition fight against Mikuru Asakura.

‘Jizzy’ was called out for the fight after he pushed Asakura during the press conference, which is seen as a sign of disrespect in Japan. His opponent was a Japanese kickboxer named Koji ‘Kouzi’ Tanaka.

The weight difference between the pair was drastic as they fought in an open weight fight. ‘Jizzy’ weighed in at around 186lbs, whereas ‘Kouzi’ reportedly weighed in at 144lbs for the fight. The American looked to utilise his size and power advantage early in the fight.

‘Jizzy’ used every opportunity he could to begin clinching and was loading up with power shots as Tanaka moved in and out of range. The pair exchanged multiple punches in the first round, going back and forth. The second round was much better for the American as he landed a right hand which appeared to have dropped the Kickboxer. However, the referee did not count it as a knockdown.

The third round spelled danger for Floyd Mayweather’s bodyguard, who was now running out of gas. Tanaka sensed this and pressed the action, landing a crisp left hook and a follow-up right to knock ‘Jizzy’ down for the first time.

The American escaped the count and got back on his feet only to be knocked down once again, courtesy of another left hook. The referee had seen enough and called a stop to the contest.

Floyd Mayweather’s bodyguard did not have any luck in his first organized fight. However, his boss put in another usual shift in the office to bag yet another victory in Japan.

The 45-year-old put on a dominant performance against the Rizin fighter Mikuru Asakura at the Saitama Super Arena in Tokyo, Japan. The fight started off slow with both fighters testing their reach with jabs.

Floyd Mayweather looked extremely sharp during the fight and used his decades of experience to keep his opponent at bay. Asakura did manage to land a few good shots on Mayweather, but the kickboxer lacked any real venom to hurt ‘Money’.

In the dying seconds of the second round, Mayweather landed a big sweeping right hand followed by a straight right to end the fight.

Asakura could not beat the count and Kenny Bayless called a stop to the contest with the Japanese fighter still on his knees.