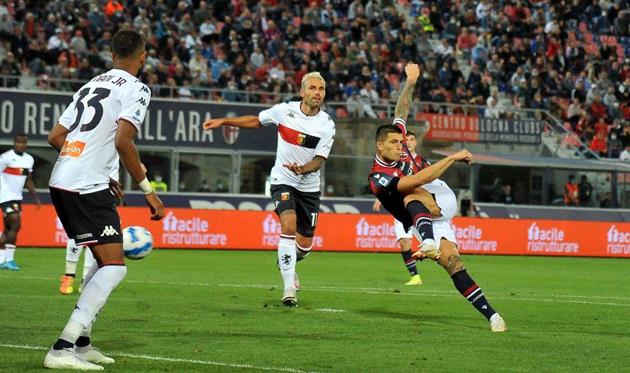 Goal – 1:0 – 49’Hickey A., Bologna Aaron Hickey (Bologna) doesn’t hesitate to lash home from just outside the box. He hits the ball precisely into the bottom right corner and it nestles in the net.

Goal – 1:1 – 55’Destro M.(Criscito D.), Genoa Domenico Criscito sends a superb cross into the box. Mattia Destro (Genoa) latches on to it and from close range plants a header inside the right post, leaving Lukasz Skorupski beaten. He displayed his eye for goal there – excellent finish. The score is 1:1.

There was late drama at the Stadio Renato Dall’Ara after two penalties in the final 10 minutes saw Bologna and Genoa share the spoils in an eventful 2-2 draw. Marko Arnautović and Domenico Criscito scored the two spot-kicks to leave both sides with a share of the spoils in a breathless end to an intriguing contest.

Mohamed Farès had Genoa’s opening chance inside the first minute after ghosting in unmarked at the far post, but Bologna keeper Łukasz Skorupski was equal to the Algerian’s effort. Yayah Kallon then fired a first-time close-range shot over the bar, in what was a largely cagey opening 30 minutes with little in the way of goal-scoring action. Bologna were awarded a free kick in a promising position just before the interval, but Arnautović saw his tame attempt sail over the bar to sum up a distinct lack of firepower from both teams in the first half.

Aaron Hickey sparked the game into life by giving Bologna the lead in the 49th minute, after rifling in a superb left-footed strike from the edge of the box – the Scotsman’s first goal for ‘I Veltri’. However, that lead lasted just six minutes, as Mattia Destro made a perfectly-timed run into the box to head home an equaliser from Criscito’s cross. Destro thought he had turned the game on its head with another header, but Skorupski made a superb one-handed stop to deny the forward.

Bologna were pressing for what could have been a decisive second goal, and Sirigu was forced into a fine one-handed stop to push over Lorenzo De Silvestri’s goal-bound header. But Zinho Vanheusden gifted the hosts a chance for a second goal after pulling down Nicola Sansone, and Bologna were awarded a penalty. Arnautović confidently dispatched the resulting spot-kick in the 85th minute to restore Bologna’s lead, but there was time for even more drama. Minutes later, Kallon was sent tumbling inside the box, resulting in another penalty where Criscito sent Skorupski the wrong way to score a second Genoa equaliser. Bologna head coach Siniša Mihajlović was then shown his marching orders with a straight red card in stoppage time, to cap off a crazy end to the match.