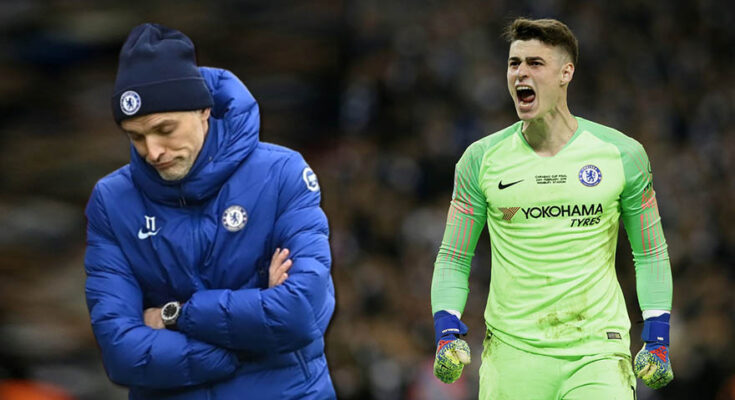 Chelsea’s general manager Thomas Tuchel admits he has not held future talks with Chelsea star ‘not happy about the situation’ with respect to playing time.

The 27-year-old shot-stopper has played just 15 times for the Blues this term in all competitions.

Kepa has found his opportunities severely restricted due to the form of first-choice keeper Edouard Mendy. His most recent Premier League appearance came in January when Mendy was off with Senegal in their triumphant AFCON campaign.

The Spaniard is still the most expensive goalkeeper in football history following his £71 million move from Athletic Bilbao in 2018. However, he has endured a mostly difficult time at Chelsea after committing a number of high-profile errors upon his arrival.

In a press-conference ahead of their match against Watford on May 22, Chelsea boss Tuchel commented on Kepa’s future. The German said (as quoted by Football.London):

“It depends what he wants and it depends what his plans are, but I know that we are very privileged to have Edou (Mendy) and Kepa in our squad. I know for sure that Kepa is not happy about the situation and he deserves to play more and he can be a strong number one.”
He added:

“He arrived as a number one goalkeeper so the situation is not easy. I can tell you that he is a fantastic team player since day one and always was and never let anybody down.”
He then shared that he hasn’t talked to Kepa about his future and added:

“So no, we did not have this conversation. I know the goalkeepers coaches have these conversations at the moment and then we will take our time to speak with him, reflect what’s best, what the possibilities are and I’m, of course as a coach, super happy to have both strong goalkeepers. Let’s see.”

Chelsea have faced a tumultuous season following the sanctions placed on the club by the United Kingdom government.

Their recent draw with Leicester at Stamford Bridge on May 19 meant the west London club have won just eight home games this season. This is something that Tuchel recognises is not good enough.

“Of course, I think we can do better. I think it is not a lot; it is margins. We will look into that, it is not the moment when I have analysed everything and I don’t have the answer because we would have changed it before.”
He added:

“We struggle with efficiency, with goal scoring records, with consistency, with determination, with precision in the box against teams who defend deep.”