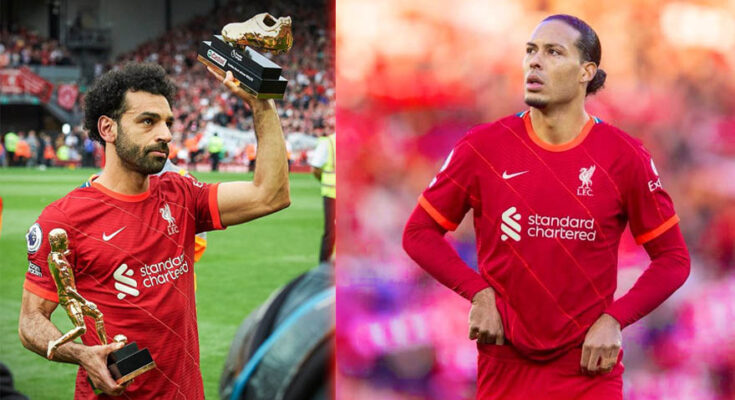 Salah, 30, was speaking with Manchester United legend Rio Ferdinand on BT Sport where he selected five top players for his team.

The Egyptian star said (via EmpireOfTheKop):

“I go for Trent, I love Trent! So I go Trent, Mbappe, myself and sorry Virg, I don’t defend! Messi and Ronaldo”.

Salah’s inclusion of Trent Alexander-Arnold is merited given the extraordinary campaign the right-back has had at Anfield. The English full-back finished the season with a remarkable 19 assists in 47 appearances and continues to be touted as the best right-back in the world.

There can be no dispute over the Reds forward’s inclusion of Paris Saint-Germain star Lionel Messi and Manchester United hero Cristiano Ronaldo. The iconic duo continue to dominate on the main stage and have mesmerized fans year after year.

Ronaldo, 37, hit an impressive 24 goals in 39 appearances for a United side that have endured a woeful campaign.

Meanwhile, Messi, 34, has taken his time adapting to life in Paris following his blockbuster departure from Barcelona. Nevertheless, the legendary forward finished the campaign with 11 goals and 15 assists in 34 appearances across all competitions.

His PSG teammate Kylian Mbappe has wowed fans this season with his eye-catching performances at the Parc des Princes. He is being touted as a future Ballon d’Or winner, ending the campaign with an incredible 39 goals and 26 assists in 46 appearances.

Salah has been in scintillating form himself this past season, striking 31 goals in 51 appearances.

But there is no place for his teammate Virgil van Dijk in the Egyptian’s dream five-a-side team, with the Egyptian not putting the emphasis on defense.