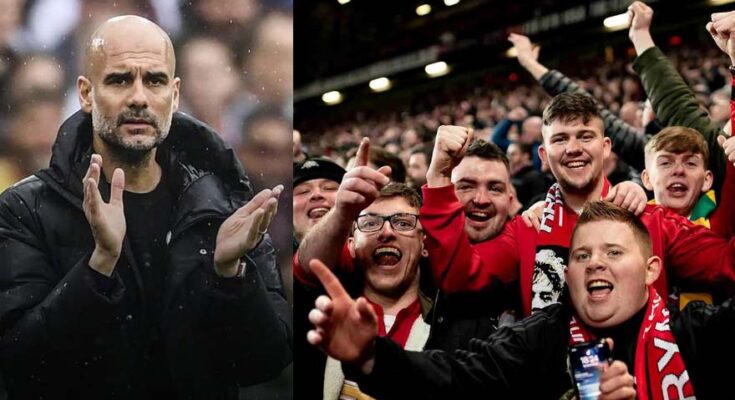 Manchester City manager Pep Guardiola has sent a personal invitation to Manchester United fans to support his side ‘in the streets’ this weekend over Liverpool, on one significant condition.

The race for the Premier League title between holders Manchester City and Liverpool comes down once more to the final day of the season, with just one point between the two sides heading into a title deciding, action-packed Sunday.

Pep Guardiola’s men fought back to claim a point after being two goals down at half-time against West Ham last week, with Liverpool following up an FA Cup final win over Chelsea with a midweek triumph at Southampton to set up a nervy state of affairs for the weekend.

Whilst helping steer his side to what will be a fourth Premier League title in five years, Guardiola has been involved in an ongoing tussle with what he considers to be a pro-Liverpool media environment, often claiming in press conferences a large section of the English press would like his side to falter.

Having already collected the FA Cup and Carabao Cup with penalty shootout wins over Chelsea this season, Jurgen Klopp’s men could still, in theory, pull off an unprecedented quadruple should City slip up against Aston Villa and Liverpool beat Real Madrid in the Champions League final.

Speaking ahead of his side’s final league fixture of the campaign, the Catalan was asked about his thoughts on Manchester United fans rooting for the Blues on Sunday in fear of the prospect of seeing Liverpool – their historic rivals – from adding the league to their trophy cabinet for the season.

“Are you sure? So Manchester United (fans) like City more than Liverpool,” the 51-year-old said in his pre-Aston Villa press conference on Friday afternoon.

“Oh my god, I did not know it! Is it true? So I was wrong when I said everyone wants Liverpool to win in this country – I was wrong!”

“Welcome! Welcome, if they (Manchester United fans) want to join us in the streets. But they have to wear blue shirts!”

Guardiola has been handed a key personnel boost for the title decider against Steven Gerrard’s men as Kyle Walker and John Stones took part in first-team training this week, with the Manchester City manager confirming the England pair are in contention to feature on Sunday.

The assembled media at the press conference assured him it was correct, and that brought a smile and a retort which mentioned his claim last week that everyone in the country outside of City fans wanted Liverpool to win the title – a claim he has since qualified by suggesting he was talking about the prevalence of Liverpool fans in the country and of former Liverpool players in the broadcast media.