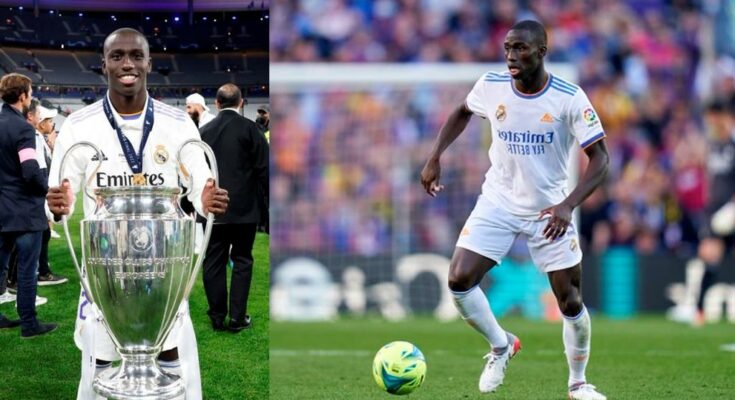 Paris Saint-Germain (PSG) are set to rival Chelsea and Manchester United in the pursuit of Real Madrid defender Ferland Mendy, as per Defensa Central.

Mendy’s days at the Santiago Bernabeu appear to be numbered. David Alaba is likely to become Carlo Ancelotti’s first-choice left-back.

However, the arrival of Antonio Rudiger as a free agent from Chelsea has placed doubt on Mendy’s future. He could be set for a big move this summer.

PSG are reportedly now contenders for the 27-year-old and will look to compete with Chelsea and Manchester United for the Frenchman.

The Ligue 1 champions do possess Nuno Mendes as their left-back option. However, the Portuguese star’s lack of experience is potentially leading the French side to pursue Mendy.

The Real Madrid defender is reportedly aware of interest from PSG, although the club’s new director Luis Campos is yet to contact the Spanish side.

Los Blancos would reportedly be open to selling Mendy if a fee in the region of €48 million arrives this summer.

The French left-back arrived at the Bernabeu from Lyon back in 2019 for a similar fee and Madrid are looking to recoup the price they paid for the defender. Mendy has three years left on his current deal with Real Madrid.

It seems likely that Antonio Rudiger will become a mainstay in Real Madrid’s side following his free transfer from Chelsea this summer.

The German has been hugely impressive over recent years in Thomas Tuchel’s backline, key to the side’s 2021 Champions League success.

Meanwhile, David Alaba’s best football is often played at left-back, as he did for many years with Bayern Munich.

This led to Ferland Mendy’s future as Carlo Ancelotti’s first-choice left-back becoming doubtful. He impressed for Los Blancos last season but a move to PSG or Chelsea could be in the offing.

It seems highly unlikely that Manchester United will come in for the Frenchman given that the Red Devils have just signed Feyenoord left-back Tyrell Malacia.

However, Thomas Tuchel’s side may be in need of a new left-back with uncertainty over the future of Marcos Alonso.