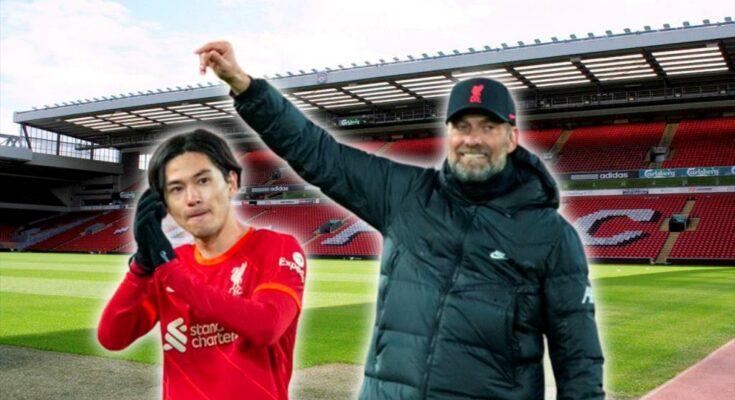 Former Liverpool forward Takumi Minamino has expressed his excitement at joining his new teammates at Ligue 1 club AS Monaco. Last month, the Reds confirmed the Japanese striker’s exit after a two-and-a-half year stint with the club.

His time with the Merseysiders included a second-half loan spell to Southampton in 2021.

With the new season ready to get underway in a few weeks, Minamino met his Monaco teammates for the first time. The Ligue 1 side are in Portugal for their pre-season training and that’s where their new striker joins them.

For his part, Minamino has done a background check on the club and is gearing up for the new challenge.

“It’s a new challenge for me, a new team, a new country, a new championship: Ligue 1. I am very excited about the idea to join the team. I watched a few matches last season. I know the team a little bit. Monaco has had a good run in the Champions League, until the semi-finals I believe (in 2017). With players like Kylian Mbappe or even Fabinho.”

The Japanese was a bit-part player at Liverpool during his stay at Anfield and left after making 55 appearances for the club. He contributed 14 goals and three assists for Jurgen Klopp’s side.

The Reds signed him for €8.5 million in 2020 from Red Bull Salzburg. They have now sold him to Monaco for €15 million, which is decent business on their part.