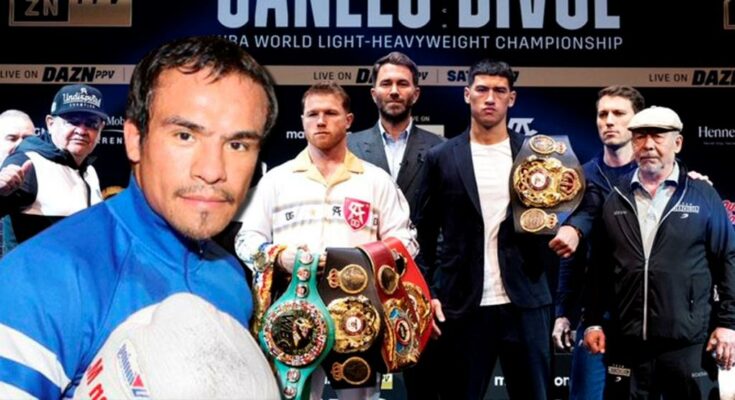 If Canelo loses to WBA light heavyweight champion Dmitry Bivol this Saturday, May 7th, it probably won’t matter that he’s not fighting Benavidez.

It would be better if Canelo showed the boxing world that he’s NOT running scared of Benavidez because many people think he’s swerving him.

“I don’t think so,” said Juan Manuel Marquez when asked if Dmitry Bivol will be a good fight for Canelo. “Canelo is a good fighter. What kind of style is easier for Canelo? The easiest style for Canelo is an aggressive style.

“What kind of style does Bivol have? Bivol’s style is an aggressive style. This is a good thing for Canelo because if Bivol has the skills to move around the ring with speed, it’s difficult for Canelo.

“Canelo likes to fight against aggressive fighters because that style is much better for him. I think Canelo knocks him [Bivol] out in eight rounds.

“Many people think different things. Bivol is a strong fighter; he throws combinations and has power. But in the sport of boxing, the styles make the fights. Bivol is ALWAYS aggressive, and being aggressive is a good thing for Canelo. Canelo loves to fight against aggressive fighters.

“What kind of style does Bivol need to use? No, he needs to be aggressive [against Canelo]. What happened in the fights that went to decision [involving Canelo].

“What happened in my career against Pacquiao? I had to knock him out to win the fight. Eight or nine rounds,” Marquez said in predicting a stoppage win for Canelo over Bivol on Saturday night.

“I told you what kind of style is easier for Canelo, aggressive fighters. Bivol is an aggressive fighter,” said Marquez in reacting to being told that the boxing world sees Bivol as possibly the toughest fight of his career.

“Many people think it’s going to be a difficult fight for Canelo because Bivol has power. But Bivol has never had an opponent with Canelo’s style. Counter punching and combinations.

Watch the full interview with Juan Manuel Marquez below: