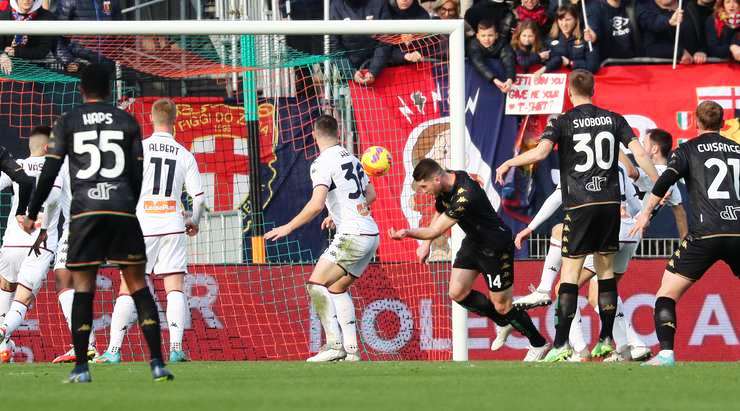 Stadio Pierluigi Penzo witnessed Genoa come from a goal down to steal a point against a well-organised Venezia outfit, who have now failed to win in 26 of their 32 competitive meetings against the ‘Rossoblù’.

With both Venezia and Genoa yearning to make a survival statement, the longstanding historical rivals got off to a high-tempo start.

Of the two, it was Venezia who looked dominant right from the outset, drawing first blood within the first quarter-hour via Thomas Henry’s header from an exquisite corner kick. As it stood, Venezia had a nine-point gap over Genoa, and that was enough to see Genoa finally awaken and mount a fightback.

Capitalising on this change in momentum, Genoa forward Caleb Ekuban executed a great individual effort in the 30th minute. The Ghana international skipped past oncoming defenders, and drove a low shot into the bottom left of Sergio Romero’s net to level the scores.

Despite their earlier dominance, Venezia almost let in another, this time from a Milan Badelj rebound shot that was superbly blocked by Romero to maintain parity.

The ‘Lagunari’ resumed proceedings with the aim of inflicting early damage to the Genovese visitors, going agonisingly close from a set-piece that was desperately cleared off Salvatore Sirigu’s line as the hour mark approached.

Genoa boss Alexander Blessin brought on two substitutes in a bid to change the complexion of play, but the attacking prowess of both teams faded as the final-quarter hour approached, resulting in a drab draw.

Venezia will rue their failure to build on an early lead, and still sit just one place above the bottom three, including Genoa. ‘Il Grifone’ themselves remain winless in the league since September 12, with this result making it an astonishing run of 23 Serie A matches without victory for the ‘Rossoblù’.