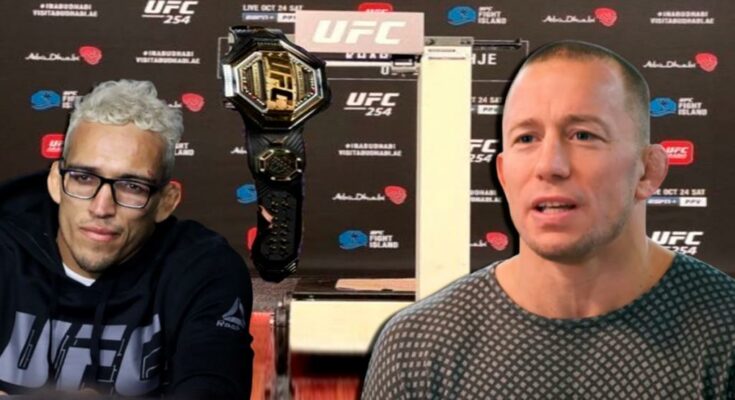 Georges Saint-Pierre was speaking to the media when the news broke that Charles Oliveira did not make weight for the championship fight at UFC 274.

The former champion in two divisions shared his thoughts on this matter immediately after he learned the news.

During his interview on the Patrick Bet-David podcast, Georges Saint-Pierre and co-hosts received the news about ‘Do Bronx’ overshooting the 155 lbs weight limit by 0.5 lbs.

After reading the headline and news article, the three of them discussed the unfortunate event.

Georges St-Pierre said that it was too early to talk about it as none of them knew the entire story:

“Well, maybe he got sick, maybe he got food poisoning. Like you know what I mean, there’s a lot of x-factor we don’t… Sometimes we’re tempted to judge somethin when we see the headline. But we don’t know that. I think it’s it’s sometimes we don’t know the whole story… I don’t think it’s a lack of professionalism, you know. It could be, but you have to wait to have more data on what happened, you know.”

Next, the UFC Hall of Famer elaborated on the weight cut’s effects on Charles Oliveira’s performance against Justin Gaethje:

“But I think in this situation it may be more damagable for Oliveira because that’s mean if you miss weight that’s mean he tried to really make weight. He pushed himself to the limit of dehydration. So maybe his body will be more messed up. Especially if it goes a few more round… If the fight goes longer it might have a very negative effect on his performance.”

‘Do Bronx’ was scheduled to defend his UFC lightweight title against Justin Gaethje at UFC 274. However, the Brazilian missed the 155 lbs weight limit and was given an additional hour to make the cut.

After failing to reach the lightweight weight class limit, it was announced that he would retain his lightweight title until he steps inside the octagon at UFC 274.

When that happens, he will be officially stripped of the title, with Justin Gaethje being the only one eligible to win it.

Check out Georges St-Pierre discuss Charles Oliveira’s botched weight cut at 1:08 of the video below: