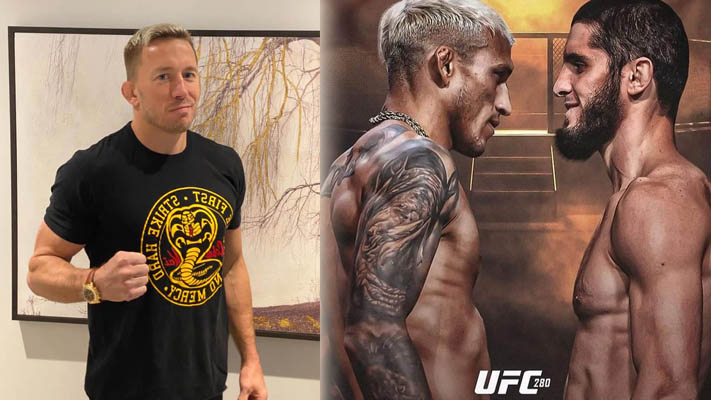 Georges St-Pierre thinks Charles Oliveira needs to keep his back away from the fence at all costs against Islam Makhachev.

In a matchup between two elite grapplers, former UFC dual-champion St-Pierre says Oliveira must not allow Makhachev to pressure him and impose his will with his wrestling. Although Oliveira has the most submission finishes in UFC history, St-Pierre likes his chances more in open space.

“If the fight stays generally in the center of the octagon, that will give the advantage to Oliveira,” Georges St-Pierre said in an interview with The Schmo.

“However, if the fight goes mostly toward the fence, near the fence, that will give the advantage to Makhachev.

“The reason for that is, I believe Makhachev can neutralize his opponent’s best ability by using the fence. Oliveira, I believe on the other side, he needs a little bit more space, especially to move his hips to be able to strike and to do some of his favorite submissions. The fight will go down depending on who will be able to implement his game plan.”

Although Oliveira is a former lightweight champion with finishes over Michael Chandler, Dustin Poirier and Justin Gaethje, he currently a +130 underdog at Tipico Sportsbook, with Makhachev favored at -165.

Khabib Nurmagomedov and George St-Pierre never fought under MMA rules, despite many UFC fans calling for the bout to happen. However, St-Pierre has recently given some hope to a potential bout against the Russian. He said that he would be open to fighting the UFC Hall of Famer in a grappling match.

While speaking with Helen Yee Sports, the Canadian stated that he would be open to fighting Nurmagomedov in a grappling match and would like to raise money for charity during the event:

“Maybe one day I will do a grappling match (against Nurmagomedov), and if it’s for a good cause and it’s well organized, you never know.”

However, ‘GSP’ didn’t want to get his fans too excited and went on to say that both fighters are currently happily retired from combat sports:

“Every time I say something like this, people get excited and rumors start. But the truth is that we’re retired, and I’m good where I am, and I’m sure he’s good where he is.”

Khabib Nurmagomedov last fought in 2020 when he beat Justin Gaethje at UFC 254. The Russian won via submission during the second round of their pay-per-view bout in Abu Dhabi.

George St-Pierre left MMA after beating Michael Bisping via submission in 2017. Both fighters are considered to be two of the greatest fighters in MMA history. So it’s natural that many UFC fans and pundits want to see the duo compete against each other.