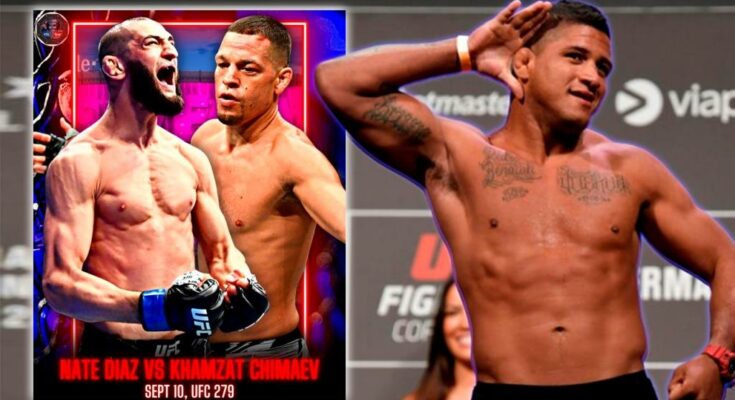 According to ESPN’s Brett Okamoto, Diaz will headline UFC 279 on September 10 against Chimaev. The event will take place at the T-Mobile Arena in Las Vegas, Nevada, and will serve as the final fight of Diaz’s contract.

“Contracts have not been signed, but both fighters have verbally agreed to the matchup.”

The promotional photo of the two fighters has already been completed and published on social media. UFC 279 is taking place on Saturday, September 10th at the T-Mobile Arena in Las Vegas.

It took no time for Gilbert Burns to react to the announcement, tweeting:

“I might start a camp in case something happens.”

It looks like Burns could just be waiting in the wings, should ‘something happen’, giving him a second chance at Chimaev.

Khamzat Chimaev (11-0 MMA) defeated Gilbert Burns (20-5 MMA) via unanimous decision in his last Octagon appearance at UFC 273 in April of this year.

Nate Diaz has been asking Dana White & the UFC for a fight for months, and when no fight was coming, the fighter requested a release from the promotion. It now looks like he’s now got his fight.

Nate Diaz (20-13) is coming off a decision loss to Leon Edwards back at UFC 263 last June and prior to that, he suffered a TKO loss to Jorge Masvidal for the BMF belt.

Gilbert Burns is just one of several fighters and fans alike weighing in on matching Diaz with ‘Borz’ at UFC 279. While Diaz is getting his final fight, some feel his opponent has the upper hand and that the UFC has basically thrown Nate under the bus.

In speaking on the UFC Hall of Fame red carpet, Gilbert Burns had this to say about a potential Diaz-Chimaev match-up:

Well, it looks like everyone will get the chance to see the two fighters battle it out at UFC 279.

Khamzat Chimaev (11-0) beat Gilbert Burns by decision last time out at UFC 273 and he has been linked to a fight with Diaz for quite some time. The Swede is 5-0 in the UFC with wins over Li Jingliang, Gerald Meerschaert, Rhys McKee, and John Phillips. This will be the first five-round fight of his career.