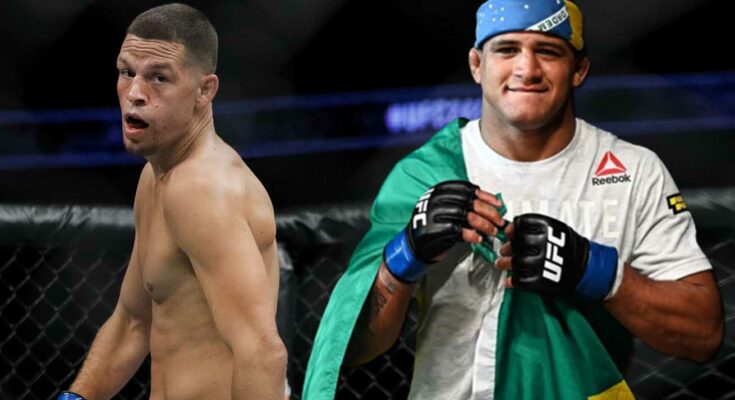 Gilbert Burns is looking for a big-name fight next.

Gilbert Burns has shown that he belongs at the top of the welterweight division. He is a former title challenger and he is looking to make his way up to the top once again. He recently fought up-and-coming contender Khamzat Chimaev on the UFC 273 main card, but unfortunately for Burns, the fight did not go his way.

Now, Burns is heading back to the drawing board and has a few big names on his checklist.

“I don’t need to give another opportunity to another up-and-coming guy. I need a big fight. I need a couple guys. I know I’m gonna have a long way up to the title. I’m gonna need two or three impressive wins. I’m okay with that,” Burns said to TMZ Sports.

“Now I want a big fight. I know Nate Diaz needs an opponent. I think that will be a crazy fight. I can put in the contract, ‘No takedowns attempted, just standup…’ I love that fight. Nate, maybe Nick, maybe Masvidal. Right now, I’m just gonna focus on my recovery.”

Among the names listed was Nate Diaz. Diaz has been lingering at the end of his UFC contract and although an extension was recently rumored, no official word has come from that. Diaz also asked recently to end his UFC contract in favor of heading to Bellator, but that also has not come true.

Burns is currently sitting in the number four spot since losing to Chimaev, and he knows a win over a big name like the ones he mentioned would get him closer to the title.

Burns’ proposal to Diaz of a no takedown clause is of course unrealistic but could be a method to entice Diaz to begin some negotiations. Once Diaz starts trash-talking with someone, that fight begins to get traction, although many times it does not result in an actual contract.

Would you like to see Gilbert Burns take on Nate Diaz in a stand-up-only war?