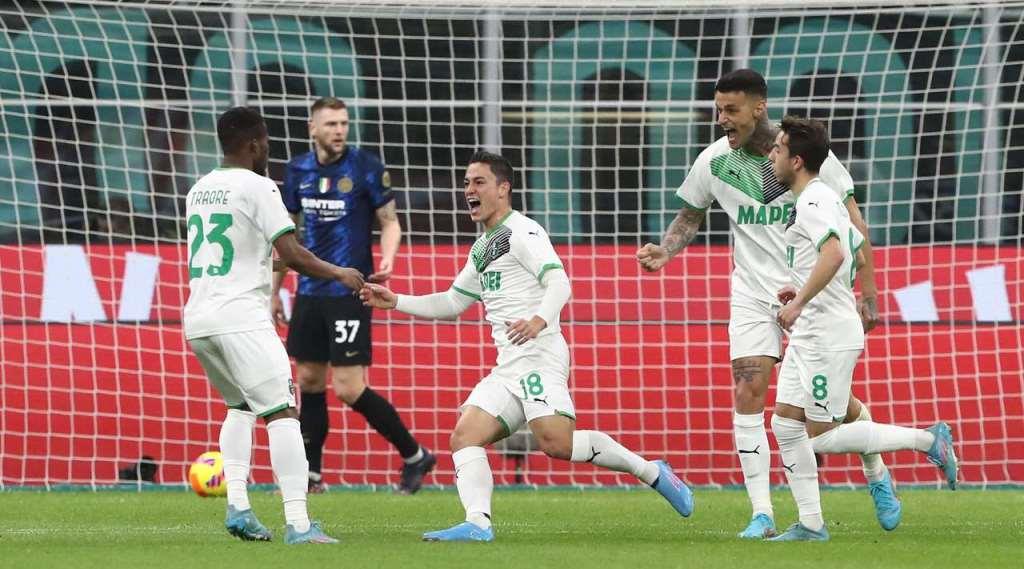 Goals from Giacomo Raspadori and Gianluca Scamacca gave Sassuolo a surprise 2-0 win at Serie A title contenders Inter Milan, who have now tasted defeat in three of their last four home matches in all competitions.

Goals from Giacomo Raspadori and Gianluca Scamacca gave Sassuolo a surprise 2-0 win at Serie A title contenders Inter Milan, who have now tasted defeat in three of their last four home matches in all competitions.

Inter had not conceded a league goal at home in the opening 15 minutes of either half this season, but that record was ended when Raspadori gave the visitors an unlikely lead after just eight minutes.

After winning the ball back high up the pitch, the ball was offloaded to Domenico Berardi who played his fellow attacker in, and the Italian youngster fired the ball between the legs of Samir Handanović to stun the San Siro.

Simone Inzaghi’s side were immediately made to rue this missed opportunity, as Traoré’s cross found an unmarked Scamacca at the far post, and his header beat Handanović before going in off the left post to give Sassuolo a shock 2-0 lead. Berardi then hit the crossbar with half-time approaching to spare the hosts’ blushes.

Inzaghi signaled his intent at the interval, bringing on Edin Džeko and Denzel Dumfries in place of Matteo Darmian and Gagliardini.

The Bosnian striker was soon involved in the action when Ivan Perišić’s lofted pass over the top played the 35-year-old in, but he was unable to beat Consigli in a one-on-one situation.

Džeko had a second opportunity to halve the deficit not long after when he was again found by Perišić – this time with a chipped ball into the area – but Consigli was able to scramble across goal to push his header to safety.

The game, as expected, became very open in the closing stages with Inter desperately searching for a way back into the game.

Stefan de Vrij thought he had pulled a goal back in stoppage time, but his header was chalked off for a handball in the build-up. This famous victory lifts Sassuolo one place to 11th, while Inter remain 2nd, two points behind bitter rivals AC Milan with a game in hand.