Have you seen it? Kamaru Usman and 2 other top UFC stars spotted testing guns in Chechnya upon invitation from Ramzan Kadyrov 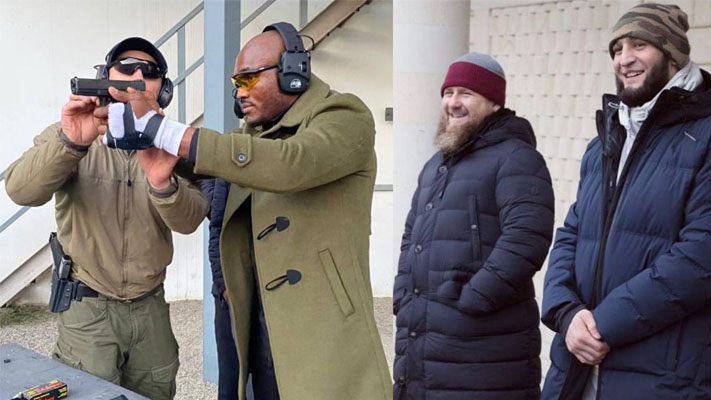 The news was reported by investigative journalist Karim Zidan, who is associated with outlets like Bloody Elbow, The Guardian, and The New York Times, and often reports on news that overlaps combat sports and world politics.

Zidan’s tweet included pictures of Usman, Cejudo, and Gaethje donning protective eye-gear and earplugs required to practice shooting. The images in the tweet show them testing out hand pistols. Zidan reported that the three fighters, who are all represented by manager Ali Abdelaziz, were testing out arms at a special forces facility in Gudermes, a Chechnyan town located on the Sunzha River, 36 kilometers east of Grozny, the republic’s capital.

Cejudo had previously posted a video with Usman and Gaethje traveling together on a private jet.

Hasbulla Magomedov, who is from Makhachkala, Dagestan, also recently shared a picture with Usman and a video tagging Henry Cejudo as well.

Ramzan Kadyrov is currently the Head of the Chechen Republic and a long-serving statesman and military general of Russia. He shares a close relationship with several UFC fighters, mostly those who hail from Soviet regions like Dagestan and Chechnya.

Former champion Khabib Nurmagomedov is a close acquaintance of Kadyrov. Among the new crop of fighters, much-hyped rising superstar Khamzat Chimaev is also very close with the Chechen chief.

There are videos circulating on social media of Chimaev sparring with Kadyrov’s sons as well as Kadyrov himself. He was also seen with them at Madison Square Garden during UFC 280 as well.

An altercation broke out between Khabib Nurmagomedov’s cousin Abubakar Nurmagomedov and Khamzat Chimaev at the event, which Ramzan Kadyrov seemingly helped settle later on.

Kadyrov’s involvement with the event was not taken well by the fans, courtesy of Chechnya’s questionable human rights policies and dictatorial leadership. Kadyrov has been very vocal about his support for Russia’s war with Ukraine and has also made some shocking remarks on the matter.

Kadyrov’s vice premier Abdul-Kerim Edilov also happens to be a former MMA fighter who competed in the UFC once.