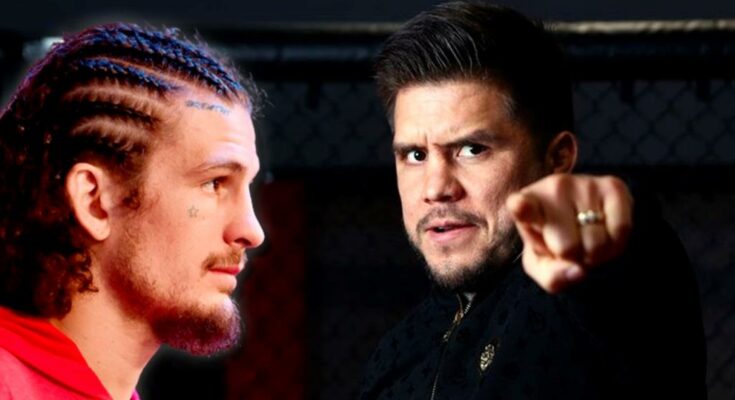 The fight didn’t start out well for O’Malley as he seemed to be hesitant to let his hands go. When he did, he was finding success. However, two of the judges gave the first round to Munhoz who unleashed a steady diet of leg kicks.

In the second round, O’Malley was finding a little more success, but still nothing major. Then, when Munhoz advanced on a blitz, O’Malley went to push him away with his hands. Unfortunately, O’Malley grazed the eye of Munhoz and caused a scratch to his cornea.

This injury stopped the fight and ended things in a No Contest. Not exactly what you wanted if you’re Sean O’Malley or the UFC. Now, there’s a lot of questions regarding what is next for O’Malley. Well, there is a storyline that came out of Saturday night that could materialize into a big fight.

After the fights, O’Malley was conducting an interview with BT Sport. During the interview, former two-division UFC champion and Olympic Gold Medalist Henry Cejudo (16-2) called him out and said that he would love a tune-up fight against O’Malley.

A confused O’Malley asked if Cejudo was actually ready to come back to fighting and Cejudo said yes. Cejudo entered the USADA pool earlier this year in anticipation of a UFC comeback.

The former champion is eligible to return in October. O’Malley then took to Twitter and asked for a fight against Cejudo in September at UFC 279. Of course, Cejudo isn’t eligible to compete at that time, but I think O’Malley didn’t realize that.

Henry seems to be seriously considering a fight with Sean and said that he is not satisfied with the option of confrontation in September, but in October they may well meet in the octagon.

“Lol Ronald Methdonald got his feeling hurt. He doesn’t want to die! I’m Eligible in October per USDA. Plus I have to lose some of this Mexican fat. Ps make sure the Virgin boyz are in front row to witness the assassination. I love paperview point 😂🏆🏆🏆 “,- wrote Cejudo on Twitter.

It’s an interesting fight for the UFC if they decide to make it. On one hand, if O’Malley were to defeat Cejudo, he could jump all the way into title contention. On the other hand, if Cejudo comes back and beats a star like O’Malley, he gets his recognition back and has his tune-up fight before a title shot.