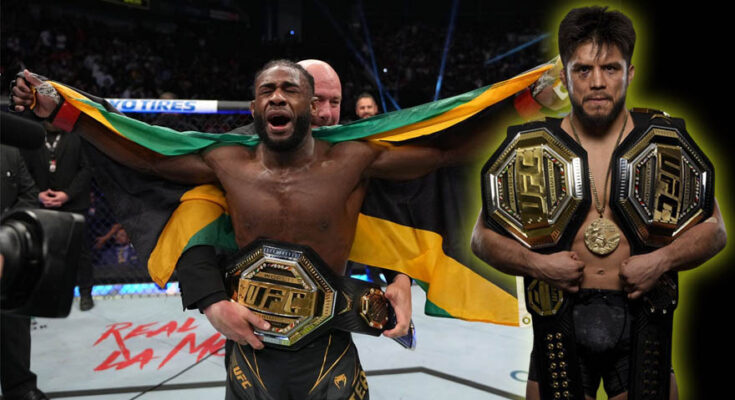 After Aljamain Sterling became the bantamweight champ he hinted at a matchup with Henry Cejudo and that talk only increased after ‘Triple C’ announced he was back in the USADA testing pool.

Even though it’s been two years since he last fought, Henry Cejudo is still one of the most active figures in the UFC. The former two-weight world champion recently announced that he’d be coming out of retirement in order to re-enter the USADA testing pool, thus getting him ready for a return to the Octagon later this year.

Henry Cejudo (16-2) has not fought since he scored a TKO win over Dominick Cruz at UFC 249 to defend his bantamweight title for the first time. He then announced his retirement but has now made it clear he is coming back and wants to reclaim his titles. He’s also the former flyweight champ as he holds notable wins over Demetrious Johnson, TJ Dillashaw, Marlon Moraes, and Sergio Pettis among others.

He’s flirted with the idea of heading up to featherweight, while also wanting to recapture the bantamweight strap that he never lost.

Recently, Cejudo took part in a fun face-off interview with Daniel Cormier and current 135-pound champion Aljamain Sterling – and he wasn’t shy when telling the champ what he thought was going to happen if they met in the cage.

In response, Sterling couldn’t help but smile when responding to his rival.

“It’s just funny to hear this,” Sterling. “It’s like, alright, just do your best, do your worst, and bring what you gotta bring because, at the end of the day, I’ve heard a lot of people say all these things about me. And it’s this, ‘He can’t do this, he got no power, he can’t strike, he can’t take me down, he’s a D-3 wrestler,’ and I just keep shutting everybody the f*** up.”

After Cejudo and Sterling did a face-to-face sit down on Daniel Cormier’s YouTube channel ‘Triple C’ claims ‘Funkmaster’ stopped bringing up his name for a reason.

“Since I told this man what I would do to him on the sit down with @dc_mma he stopped bringing my name up. You a smart little hoe @funkmasterMMA relish and cherish my belt. Two of those so called legends lasted one round and the other two. @danawhite,” Cejudo wrote on Twitter.

Cejudo has this comment after Sterling said he wanted to fight TJ Dillashaw, Jose Aldo, or Dominick Cruz for his legacy. Of course, all are former champions and as Cejudo said, he left off him for a reason after he went face-to-face with him.

Aljamain Sterling (21-3) is coming off a split decision win over Petr Yan to defend his belt after he won the title by DQ. His next fight has not been announced but it looks like it will be Dillashaw and after that, perhaps Aldo or Cejudo get their shot. But, it does seem likely that Cejudo will need to get one win before he gets a title shot.