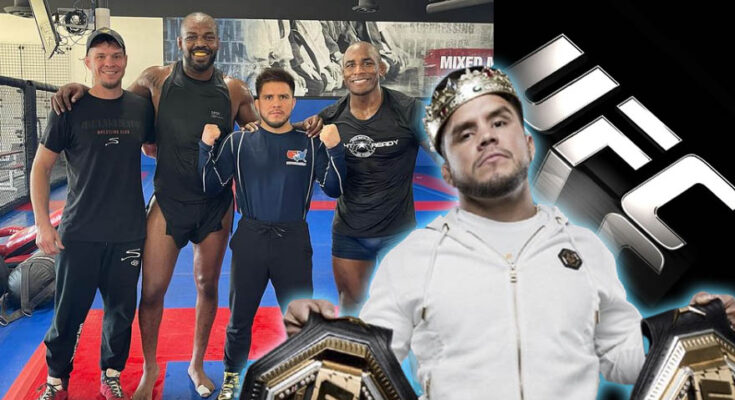 Former two-division UFC champion Henry Cejudo believes there is only one path to defeating GOAT contender Jon Jones inside the Octagon.

Jones, a former two-time light heavyweight king, has been out of action since a successful title defense against Dominick Reyes in 2020. Having vacated the gold soon after, “Bones” announced his intention to transition to heavyweight and pursue a second championship belt.

We’re now two years on and fans are still none the wiser about when Jones will enter the cage in his new weight class. Despite multiple training posts and positive updates on his bulk to a heavyweight physique, a combination of pay disputes with the UFC and legal troubles owing to another arrest saw Jones sit out the entirety of 2021.

But after spending time at Fight Ready and training alongside fellow former titleholder Cejudo, many are expecting the veteran to make his comeback in 2022.

Jon ‘Bones’ Jones will be debuting in the heavyweight division of the UFC later this year, but an opponent has yet to be confirmed. Jones hasn’t fought since his February 2020 victory over Dominick Reyes (12-3 MMA) at UFC 247.

Cejudo believes an interim title bout between Jon Jones (26-1 MMA) and Stipe Miocic (20-4 MMA) could serve as the right opportunity for ‘Bones’ to enter into the heavyweight division but doubts Miocic would be able to defeat Jones.

In an appearance on ‘The Schmozone’ podcast, ‘Triple C’ assessed Jones skills and what it would take to beat him in the Octagon saying:

“I think Jon Jones could fight another 10 fights man, and retire undefeated. I really do… That’s the fight that’s gonna happen (Jones vs. Miocic). That’s where you’re gonna be able to really see the creativity of Jon. If you really think about it, Stipe doesn’t really have that — yeah, he knocked out (Fabricio) Werdum, but Werdum kind of walked into that punch, but I don’t see Stipe with like, crazy knockout power. I think Stipe’s greatest gift is his endurance.”

“The way you beat a guy like Jon Jones, you’re gonna have to beat him with power. You’re gonna have to take risk, and that’s gonna be with power. This is why Francis Ngannou and Jon Jones is a very dynamite fight, because you have technician… Jon Jones knows how to win. The only person that could really counter that is a guy that take risks, someone who can throw out the kitchen sink.”

Ngannou (17-3 MMA) is still recovering from knee surgery and therefore would be unavailable to get in the cage with Jon Jones any time soon.

“That’s the only way to beat Jon Jones. You won’t beat him with attack, counter-attack, anticipation. You’re not a better competitor than him. He’s the best competitor right now in the UFC, pound-for-pound, in any division.”