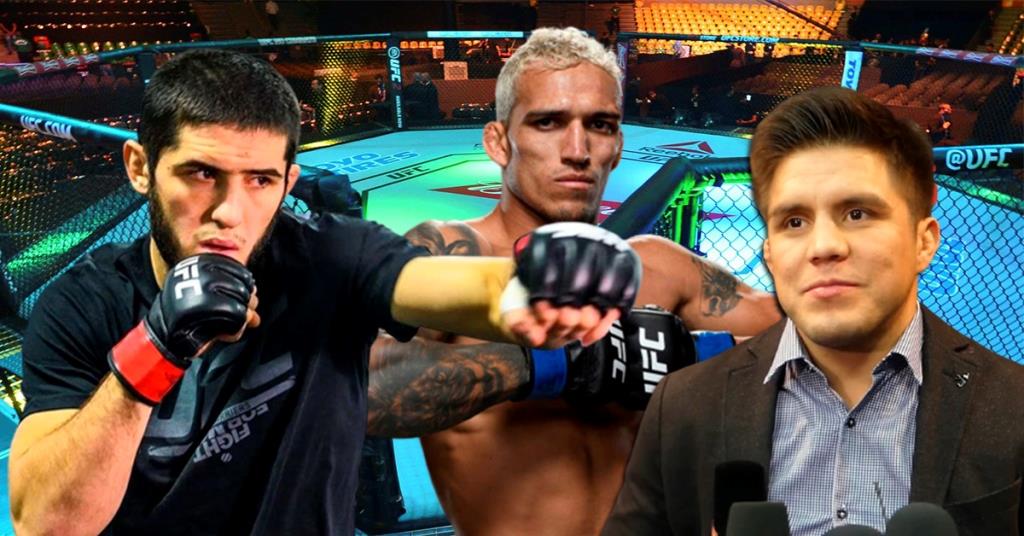 Henry Cejudo is seemingly unsure about Islam Makhachev’s chances of beating Charles Oliveira. During a recent interview, the former two-division champion acknowledged that Makhachev is a great fighter. However, he isn’t sure how the Russian’s grappling skills will fare against Oliveira’s.

Speaking to Helen Yee, Cejudo gave his take on how a fight between Makhachev and Oliveira will play out. ‘Triple C’ said:

“Charles ‘Do Bronx’, he’s a big 55’er, too. Huge. And the way he’s been able to time his wrestling. And I don’t know if Islam’s grappling is as good as his takedowns. Maybe, but I don’t know if his grappling is as good as Charles ‘Do Bronx’, it’s up in the air for me. Again, they’re both my friends, but let the best man win.”
Makhachev is set to face Beneil Dariush in his next bout. Many believe the winner will fight for the title next. In the same interview, Cejudo gave his take on the matchup. He said:

“Yeah, I think that’s a tougher matchup. Well, not really. No, I think Islam is too strong. I think he’s too young. I think he comes from a great school. You know, being part of the whole Khabib [Nurmagomedov] era, like, this is going to be good. The biggest threat for all those dudes, though – even though I do feel like, I tend to change my team – but it’s Charles ‘Do Bronx.’”

Islam Makhachev and Beneil Dariush are ranked No.4 and No.3 respectively in the UFC lightweight rankings. Charles Oliveira, the champion, is set to defend his belt against No.1-ranked Justin Gaethje at UFC 274 later this year.

On February 26th, Islam Makhachev will lock horns with Beneil Dariush. Their lightweight bout will headline a UFC Fight Night card at the Apex facility in Las Vegas. Most are of the opinion that the victor will take on the winner of the Charles Oliveira vs. Justin Gaethje championship bout, which is slated to go down in May.

Speaking to Red Corner MMA, Makhachev weighed in on the UFC lightweight title picture. He said:

“Charles Oliveira is [the] champion now and he showed good skills [in] his last two fights. That’s why I think the end of this year, I’m gonna beat him, in Abu Dhabi.”

Islam Makhachev is a childhood friend and longtime training partner of retired MMA icon Khabib Nurmagomedov. Akin to the former UFC lightweight champ, Makhachev is known to possess exceptional wrestling and grappling skills. In 2021, he secured three submission victories over Drew Dober, Thiago Moises and Dan Hooker to break into the top five at 155 lbs.

Charles Oliveira is statistically the best finisher and submission specialist in the UFC. The Brazilian not only has the most finishes in the history of the promotion (18), but the most submissions (15) as well. Out of Oliveira’s 31 career wins, 19 have come by way of submission and 9 by way of KO/TKO. His current 10-fight win streak comprises eight finishes.

It’ll be interesting to see how things play out atop the 155 lbs division over the next few months.