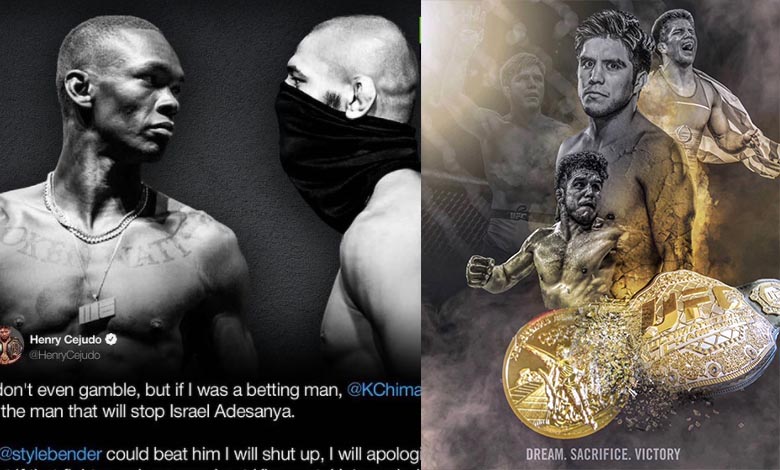 Khamzat Chimaev recently raised eyebrows when he said that Israel Adesanya would be an easier fight for him than Kamaru Usman.

While it’s obvious ‘Borz’ is incredibly talented, he currently fights at 170lbs and has only faced one ranked contender. To claim that he will not just beat but dominate the very dominant middleweight champion is bold, to say the least.

However, there are those who believe in the hype. Former Olympian and two-division UFC champion Henry Cejudo is one such person. ‘Triple C’ has claimed in the past that if a fight is booked between Chimaev and Adesanya, he’s backing the Swede.

Cejudo and Chimaev met on the recent episode of The Triple C and Schmo Show, where along with Darren Till and MMA journalist The Schmo, they discussed multiple topics. While speaking about the Chechen native’s aspirations to secure multiple belts, ‘Triple C’ said:

“If your plan is to become a two or three-time division champ, I want to challenge you… If you’re planning on becoming a double champ or even a triple champ, I think you go after Israel Adesanya. I think you go up, fight him, and then you come down or you go up to light heavyweight if you like.”

Watch the full conversation below:

‘Borz’ has shown an incredible eagerness and hunger to fight as soon as he made his way to the UFC. He set a modern-day record when he fought twice in 10 days on Fight Island across two weight divisions and won both bouts.

The last time the UFC witnessed a meteoric rise like Chimaev, it was a confident Irishman named Conor McGregor. After winning two titles in Cage Warriors, ‘Notorious’ promised to replicate the same feat in the UFC. Sure enough, after he beat Jose Aldo for the undisputed featherweight belt, McGregor fought Eddie Alvarez at Madison Square Garden for the lightweight belt and made history when he won.

If Khamzat Chimaev manages to beat Gilbert Burns at UFC 273 and finds himself in a fight against Kamaru Usman, it may not be preposterous to believe that he could find himself in a potential fight against Israel Adesanya for champ-champ status.