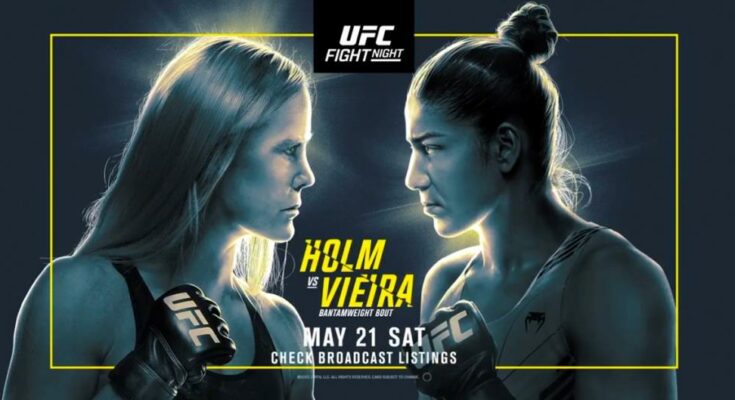 Holly Holm looks to continue her path to getting a shot at becoming a two-time women’s bantamweight champion on Saturday as she takes on Ketlen Vieira from the UFC Apex in Las Vegas.

A key women’s bantamweight clash is the main event at UFC Fight Night on Saturday on May 22.

After stunning the sports world with her second-round knockout of Ronda Rousey to win the 135-pound title at UFC 193, Holm’s struggled to get back to that historic point in time, going 4-5. But she’s gotten herself back on track and won back-to-fights over Raquel Pennington and Irene Aldana, respectively.

Standing in Holm’s way is Vieira. The Brazilian began her career 10-0, but has been on uneven footing as of late, going 2-2 in her last four. But her most recent outing was her biggest win to date, beating former bantamweight titlist and one of Women’s MMA biggest names, Miesha Tate.

The winner aligns themselves in position to challenge the winner of the Julianna Pena-Amanda Nunes rematch that will occur sometime in the summer.

Here is everything you need to know about Holly Holm vs. Ketlen Vieira.

The Holm vs. Vieira main card begins at 7 p.m. ET in the United States and at Midnight GMT in the United Kingdom. Holm and Vieira are expected to make their cage walks at around 9:30 p.m. ET/2:30 a.m. GMT, although that depends on the length of the undercard bouts.

The Holm vs. Vieira main card will be airing on ESPN+ in the United States and their UK counterparts BT Sport delivering the coverage to British fight fans.

Complete fights UFC Fight Night on Saturday on May 22 schedule: