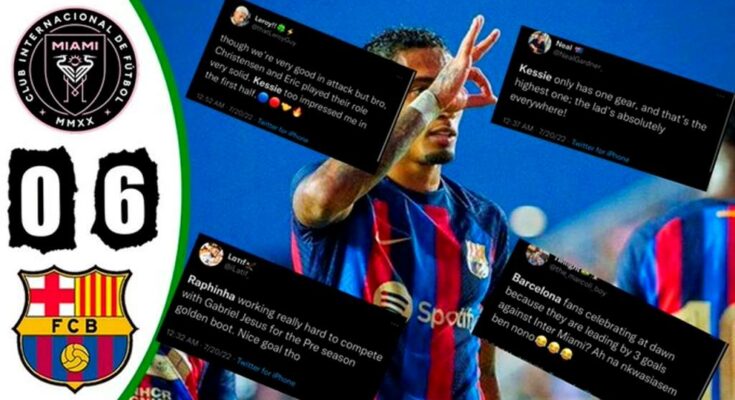 Inter Miami head coach Phil Neville said before the game that the friendly against Barcelona was “the biggest match in club history.”

That may have been the case, but it didn’t produce fond memories for the home side as Barcelona embarrassed the MLS club 6-0 in a pre-season friendly at DRV PNK Stadium in Ft. Lauderdale. The Catalan club ran the show from the opening whistle to the final kick, creating wave after wave of pressure while Inter Miami did their best just to keep up. The hosts, meanwhile, had almost nothing going forward, with barely a sniff of the attacking third.

While Robert Lewandowski wasn’t quite ready to take part, the other three new signings starred for Barcelona in the first half. Raphinha picked up a goal and two assists to lead the way, while Franck Kessie pulled all the strings and Andreas Christensen blanketed former Real Madrid frontman Gonzalo Higuain.

In the second half, the Barcelona substitutes ran a second-string Inter Miami lineup ragged and capped off a three-goal display of their own.

Inter Miami brought both David Beckham’s son Romeo and Neville’s son Harvey off the bench for cameos, but it was only a slight respite on an otherwise comprehensive defeat.

Barcelona kicked off their preseason tour of the United States with a fantastic 6-0 victory over Major League Soccer’s Inter Miami at the DRV PNK Stadium on Tuesday night. A total of 24 players took the pitch for the Blaugrana across the two halves, and all contributed to a dominant performances and six goals for a Barça team that at times looked unstoppable, with the best striker in the world watching from the stands still waiting to join the party.

The first 45 minutes featured some brilliant displays of attacking football by a fast, creative Barça side that completely dominated Inter Miami in a way that was sometimes shocking even for a friendly against lower level competition.

New signings Andreas Christensen and Raphinha made their debuts in the opening period, and it was the Brazilian who absolutely shined with his full repertoire of skills and intelligence, making excellent passes and taking on his defenders without fear.

Raphinha was involved in all the good things Barça did, including all three goals: it was his assist to Pierre-Emerick Aubameyang after a gorgeous one-two with Pedri that got things started, then the former Leeds star opened his Blaugrana account with a gorgeous volley before setting up Ansu Fati for a brilliant finish and Barça’s third of the half.

Two goals, one assist and a fantastic debut for Raphinha, and at halftime Barça had the win in the bag thanks to a dominant performance.

The final period brought a whole new XI, including Frenkie De Jong as a center-back, and many more goals: Gavi, Memphis Depay (with a spectacular solo goal) and Ousmane Dembélé made it 6-0 with 20 minutes to go, and despite playing at a slower pace than the first half side did the Blaugrana were still easily finding spaces inside the Inter Miami defense despite a change to a back five by the home team.

The final 20 minutes weren’t nearly as fun as Inter did everything they could to not allow more goals while Barça seemed to have had enough and just ran the clock out. The final whistle came, and the first preseason game in America went according to plan with a great win and quite a few excellent individual performances.

Real Madrid in Las Vegas is next, and Robert Lewandowski might play that one. It’s gonna be all kinds of fun.