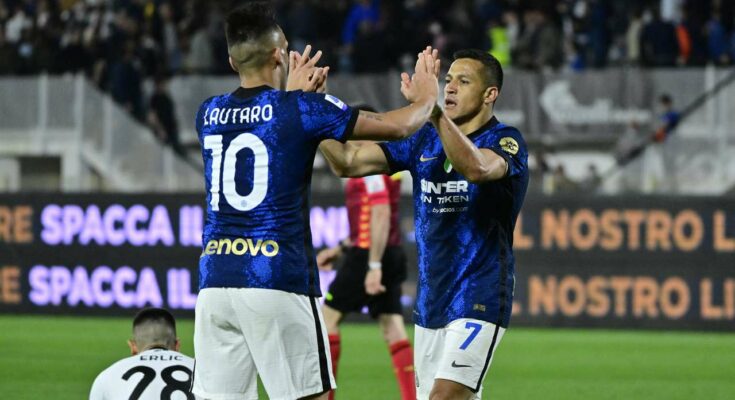 Inter Milan’s push for a second straight Scudetto continued with a 3-1 victory at Spezia, seeing Simone Inzaghi’s men reclaim top spot, extending the ‘Nerazzurri’s’ all-time unbeaten streak against Spezia across Serie A and the Coppa Italia to six matches.

Spezia remained solid in the face of early pressure from the league-leaders. Inter, on the other hand, appeared to struggle on the pitch of the Stadio Alberto Picco, which is one of the smallest in Italy.

The ‘Aquilotti’ used that to their advantage and remained compact in an effort to eliminate the threat of Inter Milan’s attack-minded wing-backs. The title favourites finally found their breakthrough on the half-hour mark in superb style.

After playing the initial ball into the box, Marcelo Brozović received a knockdown from Danilo D’Ambrosio and cannoned the ball into the top corner of the net on the half-volley to give the visitors the crucial lead.

The hosts appeared to flip a switch after the break and created a flurry of chances, looking the more threatening of the two sides as the half wore on. However, Inter’s stout defence was composed in the midst of Spezia’s pressure.

The Milan club killed the game with just under 20 minutes remaining thanks to a well-worked goal that began in their own half.

To cap off superb move down the left-flank, Ivan Perišić played in a whipping ball towards the Inter strikers, and second-half substitute Lautaro Martínez managed to get a deft touch on the ball to direct it into the side-netting, extending Inter’s lead to 2-0.

Giulio Maggiore lashed the ball into the top corner from outside of the box to give the visitors a scare with only three minutes remaining, but it was too little too late for the hosts to pull themselves back into the game, as Alexis Sánchez reclaimed Inter’s two-goal lead on the break with one of the last kicks of the game.

A third loss in five games is far from ideal for Thiago Motta’s side, however, they can take solace in the fact they remain 11 points clear of the relegation zone, and are on course to play a third straight Serie A campaign next season.