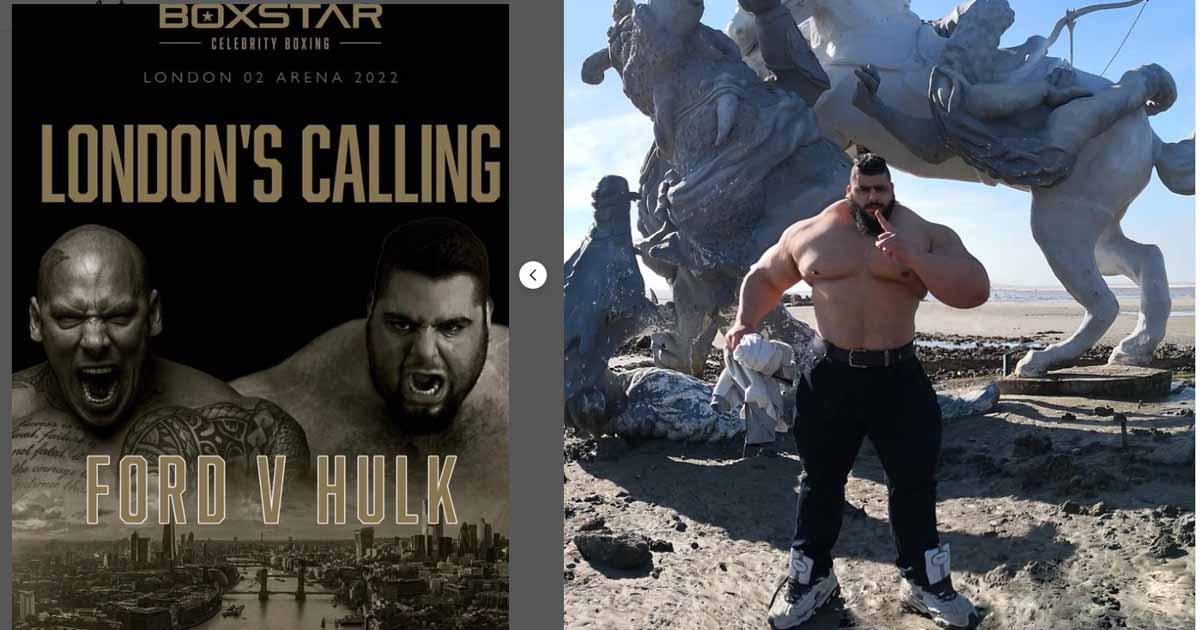 Martyn Ford, the bodybuilder dubbed ‘The World’s Scariest Man’, says he is “hugely disappointed” after confirming that his April 30 boxing match against the ‘Iranian Hulk’ Sajad Gharibi has been scrubbed from the card to take place in London later this month.

Martyn Ford was set to headline the celebrity boxing event against fellow behemoth Gharibi but he revealed in an Instagram video on Monday that it was off, and while he didn’t elaborate on the specific reasoning for the cancelation he heavily implied that it was because his Iranian rival withdrew from the bout.

“This is a statement I didn’t want to have to realize but unfortunately April 30, my fight is going to be postponed,” said Ford in the minute-long video announcing the change to the forthcoming fight card.

“The event is still on, it’s just my fight. The event will still go ahead and there are some great people and fights on.

“Unfortunately mine won’t be one of them, for reasons out of my control. It doesn’t take a genius to figure them all out.

“I don’t want to go down the route of talking about it; too much time and energy has been wasted.

He added: “Naturally, I’m hugely disappointed my fight against Iranian Hulk will no longer be going ahead, particularly given the fact I have dedicated so much time to my training program and doing everything to ensure I was in the best possible shape to headline the event.

“Although I will no longer be involved, I now look forward to attending the Boxstar Celebrity Boxing event as a fan, and showing my full support for those brave competitors who are taking part, some of whom will be competing in a boxing match for the first time in their lives.

“I would like to thank my fans for their continued support, and I hope to return to the ring in a competitive nature as soon as possible.”

The crumbling of the fight between Martyn Ford and Gharibi comes after the Englishman alleged that much of the Hulk’s online infamy was the result of photoshopped pictures – claims which Gharibi denied – at a recent press event to promote the contest.

Ford even shoved Gharibi to the floor during their face-off, something which the Hulk later said brought shame to his family.

“I cannot call my family. When I returned to Iran, I didn’t go to my family,” an emotional Gharibi said on Iranian television of the shoving match with Ford.

“Now, some say you got paid to fall down. It hurts my heart. How can you say that? How can I not think about statements? How can I sleep? How can I rest? I personally feel very bad. I cannot sleep, however I’m taking sleeping pills.

“When a mom says that to her child, how can it be tolerated? There’s a lot of pressure. They said you got paid. I swear, I didn’t get even 1 dollar. I ate egg as lunch in Dubai. If I got paid even 1 dollar – I can’t continue.”

While the chief attraction for the April 30 event is now but a memory, all eyes will now turn to another boxing match set to take place at the event – between Manchester United legend Patrice Evra and American vlogger Adam Saleh, but it will remain to be seen if it will capture fans’ attention in quite the same way as the now canned battle between the two giants.